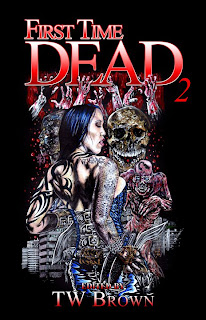 Have you ever found an author that you like? Somebody who has been publishing for awhile, somebody who has a back list but who is entirely new to you? You absolutely love this author and wish you had discovered them earlier because now you have so much to catch up on. Wouldn't it have been great if you had been able to get in on the ground floor, so to speak. Well, here's your chance. First Time Dead is a two volume zombie anthology published by May December Publications and edited by TW Brown. All of the stories contained between the covers have been written by first-time authors. Now before you go rolling your eyes, let me say this. . . I was impressed. And for me to say that about a collection of short stories. . . Well, if you've read my past reviews, you know how much I dread them because they are usually inconsistent.

I mentioned that First Time Dead is a two-volume anthology; however, please note that I am only going to be covering Volume 2 in this review, which gets off to a kick-ass start with "In This House I Dwell" by Ron Harris. The zombie apocalypse is already underway when the story opens, and Harris' tale of survival of a man and his wife veers from the norm because some of the zombies are evolving, regaining the ability to speak, think, and reason. But is there something darker at work here?

DA Chaney explores the possible origins of the outbreak with "Zombie Bites: The Old Dead", combining the decaying zombies we all know and love with a hint of the more traditional zombies of The Islands.

With "Ooky" Matthew R. Davis paints a classic portrait of adolescent one-upmanship as a young couple pass regaling each other with past sexual exploits. While the zombie action is low in this one, the story itself proves to be one you won't quickly forget.

Joe Blevins' "Once More Without Feelings" does not deal with the zombie apocalypse, which we have come to expect with zombie anthologies, but delves more into Voodoo idealogy. Blevins proves that when you got it, you got it, even when you're dead.

Donny Chavez shows us what a "day in the life" of a handful of survivors must be like in "Snow Days". Of all the stories, this is one that I feel could very easily be expanded upon. It has the same feel to it as The Walking Dead.

Alexandro Rios offers up a more analytical view of the outbreak in "Zombies in Puerto Rico: Island of the Dead," in which an ex-reporter witness and blogs about the breakout as it occurs.

"The Last Legacy" by Amanda Larson focuses on a mother and her two children who decide to stay in their remote island home, literally cut off from the outside world, and how the community pulls together to survive the outbreak.

Eric Pollarine's "The Mission" takes us underground, as the survivors of the zombie apocalypse take to the sewers and underground tunnels. This is one of the most desolate stories in this volume, as it shows the hopelessness of the "new world", that not matter what you do to survive, eventually you will be joining the ranks of the walking dead.

Jason Thacker takes a more comic approach to the zombie tale with "The Hungriest Zombie" as he tells his tale from the zombie's point of view. This is the first zombie story I've come across where, between the chuckles, I actually felt sorry for the zombie.

"Rude Awakening" by David Maynard is a heartbreaking tale of a father losing his family one by one to the outbreak. The ending of this tale is chilling and memorable.

In "Zombie by Night" Aaron Phillips takes a unique experimental approach to the zombie theme that has a vampiric feel to it as he tells of a man's search for his brother's murderer.

Gregory A. Carter is the only author to have the zombie affliction spread to the animal population in "What the Cat Dragged In". It's a story of love, loss, despair, and hopelessness as a young couple prepares to flee the city for what they hope will be a safer area.

While not all the stories in First Time Dead Volume 2 will be for everybody (and that can be said about every anthology), there's no denying the talent that exists between the covers of this collection. The stories are well crafted and well written, and if you are a fan of zombie fiction, I would highly recommend checking it out. I don't think you'll be disappointed.
Posted by Woofer at 10:29 PM