This Ain't No Maryland Crab Fest 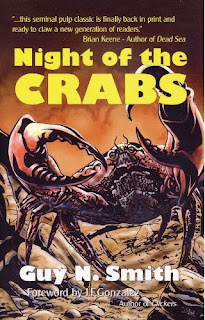 When I was younger, I remember seeing Guy N. Smith's Night of the Crabs on my brother's nightstand. At the time, I was only reading high fantasy, but I remember thinking that it looked awesome. It looked like it would be as much fun as the movies I loved to watch. Of course, by the time I turned my attention to horror fiction, the book was nowhere to be found in the house, not in the house and not in the stores, which is why I got so excited when I saw it had been released on Amazon for the Kindle. I was finally going to get a chance to read it.

It started with Milton Hogarth, a corporate schmuck about to go down for embezzlement. He's planning on faking his own death in order to escape prosecution, so when he really does go missing, nobody takes notice. However, when Ian Wright and Julie Coles go missing, presumed drowned, somebody does take notice.

Cliff Davenport doesn't buy the explanation he's been given by the authorities concerning his nephew's disappearance. Ian and Julie were both strong swimmers, so a simple drowning doesn't seem likely. There has to be something more to their disappearance, but he can't for the life of him figure out what it might be. Determined to find out the truth concerning his nephew's disappearance, he takes a little trip to Barmouth, a little town on the coast of Wales, to do a little investigating of his own. He sets up base camp at a local Bed and Breakfast run by an old friend, who wastes no time trying to play matchmaker between Cliff and a young divorcee. Not know what he he's looking for, he agrees to let Pat Benson join him while he investigates his nephew's disappearance. What he discovers is far beyond anything he could have expected. The stretch of beach known as Shell Island, as well as the surrounding areas, has become the hunting grounds for a nest of giant crabs.

Davenport reaches out to his contacts in the military, and at first he is treated with ridicule and disbelief, but when the evidence presents itself, it becomes an all-out war for survival. The only problem is, is the military smart enough to outsmart the crabs, which appear to have the ability to think, reason, communicate, and strategize.

I had mixed feelings while reading Night of the Crabs. A part of me loved it because I love those old B movies like Tarantula, The Deadly Mantis. and all those other giant bug movies, but the issues I had with the book outweigh the pleasure I took away from it. For those of you who know me, you know that I am against romance in horror fiction; I find it forced, poorly timed, and progresses way too quickly. The relationship that develops between Cliff Davenport and Pat Benson is a perfect representation of everything I find wrong with romance in horror. Cliff is supposed to be looking for his missing nephew. First and foremost in his mind should be finding his missing relative, not this woman he just met. And once the crabs enter the picture, getting rid of them should be first priority, especially when you believe they killed your relative. However, Cliff at one point is ready to chuck everything and leave in order to protect the woman he loves. Loves?! He just met her. And the author mentions during the course of the narration that something like three weeks has elapsed during all this, and they are already planning a wedding. This was a sticking point for me, and no matter what I was reading, I kept coming back to this—they've only known each other three weeks and already they're engaged. The other thing that kept playing in my mind is, our dear Ms Benson is just out of a really bad marriage. Would she be jumping into this kind of relationship so soon?

The other sticking point for me was the writing. Night of the Crabs wasn't badly written, but I did get the impression that it was targeted towards a teen audience. It seemed like every time the characters were mentioned, Smith used the full name: Julie Coles did this, Julie Coles did that, Oh my God, the crabs ate Julie Coles; Cliff Davenport met Pat Benson, Cliff Davenport had breakfast with Pat Benson, Cliff Davenport had to get back to the B&B to make sure Pat Benson was safe. It felt as if I wasn't thought to be smart enough to remember the character names and that I was being talked down to. Having to stumble over the full names of each character every time also broke the fluidity of the text.

Do I regret reading Night of the Crabs? No, not when it is considered a cult classic within the genre. Will I read more of Smith's Crab books? Now that I know what I am getting myself into, yes. It will also be interesting to see if the books improve over time. Would I recommend it? Yep, if only because it has reached cult status within the horror genre.
Posted by Woofer at 5:52 PM