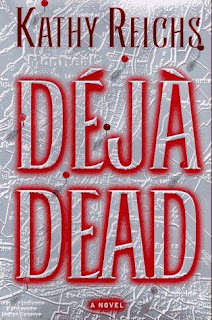 After five years of being on the air, I recently started watching the television series BONES, starring Emily Deschanel as Dr. Temperance Brennan and David Boreanaz as Special Agent Seeley Booth. I like it. I like it so much that I decided to check out the books the series is supposedly based one. First in the series of books written by Kathy Reichs is Déjà Dead. The fact that the main character of the books is named Temperance Brennan is about the only similarity the book has to the series.

Brennan is a forensic anthropologist who works in affiliation with the Canadian Police Department. She is usually called in when older bones are discovered and they need to determine their age or cause of death. Her current case involves something more recent, a young woman who was murdered and dismembered. Something is triggered in her mind as she seems to recollect another murder victim who died under similar circumstances. When she brings up the similarities to the police, they refuse to even consider it, so Brennan, who has no police training, takes it upon herself to find the killer of, as it turns out, five women. Can she do it, or will she just bungle things and end up having to be rescued by the people who should be investigating?

Reading Déjà Dead, I was quickly reminded why I stay away from certain types of fiction. When Reichs started going into the details of how certain lab procedures were done, while interesting, the story for me came to a grinding halt. It struggled to find a balance between the scientific aspect and the police procedural, and the transitions were not fluid.

Another stumbling block was the language. Reichs seemed to feel it necessary to give us the original French of some dialogue, immediately followed by the English translation. The infrequency with which this occurred made it seem like a gimmick to up the word count slightly and I don't feel it was necessary. It was another screeching halt moment, where everything is moving along smoothly, and then there's a line of French, followed by the English translation: it felt like I was backtracking. If Reichs didn't feel comfortable trusting the reader to be able to figure out what was being said, then it shouldn't have been there, especially when the rest of the dialogue continues in English.

I also couldn't shake the feeling while I was reading that I was reading a young adult novel. We are supposed to be dealing with a well-educated professional woman, but she behaves more like Nancy Drew when she takes off to investigate without thinking things through. She repeatedly places herself in perilous situations because of her own carelessness, and only after she's knee-deep in it does she stop and think that maybe she shouldn't have done this. The one advantage the teen sleuth has over Brennan is that Drew at least has the foresight to tell her people—friends, adults, parents—where she's going to be. There's always going to be someone who can go to the cops and say, "Nancy's in trouble." Brennan keeps everything close to her, not sharing until she's good and ready. Granted, she's in a male-dominated field, and the men treat her like more like an annoyance than a professional, but you can't blame them if this is the way she acts.

I reluctantly have to admit that I might be judging Déjà Dead a little too harshly, and if I am, it's probably because it wasn't what I was expecting. Having gotten to know Brennan via the television series, I was expecting a novelization of the series, but that isn't what I got. The calm, confident forensic anthropologist who knows her way around the lab like the back of her hand but whose social ineptness makes her so endearing is nowhere to be seen on this book. Nor do we see the suave Seeley Booth who can find his way around a crime scene with his eyes closed, but can't seem to see what's right in front of him when it comes to the chemistry between him and Brennan. The Brennan of the television series would never think of investigating on her own because she knows her strengths and weaknesses, and they are not police procedural work. The Brennan of Déjà Dead seems to think of herself as some sort of superwoman, somebody who is infallible and immune to physical harm until she puts herself in the thick of things and only then thinks it wasn't such a good idea. Between the two, I'm more drawn to the television series.

Does that mean I won't read another of Reich's Temperance Brennan mysteries? I can honestly say, "I don't know." If I do, it won't be for awhile. Does that mean you shouldn't pick this up? I'm not one to tell people what they should and shouldn't read; I only recommend what I think people might like based on my own feelings, and unfortunately, Déjà Dead is not high on my list of book recommendations.