Tale of a Body Thief 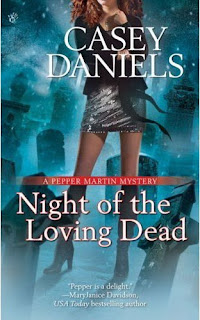 When last we saw Pepper Martin, Damon Curtis had just crossed over and poor Pepper was nursing a broken heart. Yes, she had fallen in love with her client, which isn't necessarily a bad thing, unless your clients happen to be dead. And that was the one thing all of Pepper's clients had in common. You see, for those of you who aren't familiar with Pepper Martin, she sees -- and hears -- dead people. The down side to this is the dead only show up when they need something, and they won't shut up until Pepper agrees to help them. Which usually means life-threatening situations for Pepper.

Besides mourning the loss of her ghostly boyfriend, she is also puzzled over the appearance of a picture postcard of Graceland Cemetery in Chicago. On the back, one word is written: HELP.

As Night of the Loving Dead opens, Pepper is trying to ease the pain of a broken heart by indulging in a night of passion with Quinn Harrison, one of the two semi-steady living men in her life. There has been some flirtation between her and the detective, and she has decided to take there relationship to the next level. As Quinn tries to arrange a second date, Pepper breaks the news to him that it will have to wait until she gets back. Her boss at the cemetery where she works as a tour guide is sending her to a cemetery conference in Chicago. Pepper is to give a presentation she is unable to give herself because of her daughters are all down with the flu.

From the moment she sets foot in Graceland Cemetery, she is drawn by a feeling of deja vu to one particular mausoleum. She remembers the postcard and pulls it out of her purse. The crypt depicted on the card is the very same one she is now standing before. As she tries to piece the puzzle together, she senses something behind her and turns just in time to see a dark shadow disappear into the trees. Its' presence unsettles her because, while she doesn't know what it was, she knew it wasn't a spirit. As she turns back to face the tomb, she comes face to face with a ghost. From the spirit's attire, she appears to have have been some kind of laboratory technician or some other medical personnel. Her name is -- was -- Madeline Tremayne, and, as it turns out, she is the one who sent the postcard to Pepper. Madeline is rude and insulting, which is a complete turn-off for Pepper. As the ghost is seeking her help, she thinks the spirit should be a little more polite. As she turns to leave, telling Madeline to find somebody else, the ghost drops the bombshell by mentioning Dan Callahan, the other semi-steady living man in Pepper's life. Like it or not, Pepper has to help Dan, who has unknowingly gotten himself involved in some illegal doings that involves the disappearance of homeless people. At the mention of the term homeless, shivers of disgust encase Pepper, as she still has not fully come to terms with the fact that she is now a working girl (not that kind) where she was once was quite wealthy (see Don of the Dead for the back story).

There's more going on than Pepper is being told, as Madeline is not giving her all the information, and as any investigator knows, you cannot launch a full-scale investigation without knowing all of the particulars. Madeline only reveals certain information on a Need-to-Know basis, which leads the reader to believe there is something not quite right with the ghost. While Pepper is charging in to save Dan, and by extension the homeless people, she is caught off guard by the mad Doctor Gerard, who has an obsession with trying to reach those who have passed from this earth. In short, he wants what Pepper's got. He tells Pepper that she will give him what he wants, even if he has to take it against her will. And what it is he wants? Her brain -- as it seems that is the key to Pepper's ability to commune with the dead.

As the book progresses, there are twists and turns and revelations that are guaranteed to thrill. While Pepper's usual fieriness is present, this book takes a darker turn than previous outings with our favorite Detective to the Dead. The dark shadow Pepper spied in the cemetery returns occasionally throughout the book, and we don't find out what it wants until the very end. There's even a point where Pepper falls victim to a body thief, where Pepper and a spirit trade places -- against Pepper's will, of course -- and you are left fearing for Pepper and wondering if this spells the end of our heroine. If she cannot get back into her body, she will fade away into nothingness.

The fact that I love this series surprises even me. I would classify it as chick lit, which I normally stay away from, but I can't get enough of Pepper. Casey Daniels has created in Pepper Martin an unlikely heroine, a spoiled rich girl who at first glance cares only for herself, but beneath her ample bosom beats a heart of gold. She is bold and brassy, a real spitfire who is guaranteed to warm your heart and and show you a thrilling time. Feeling bored? Pick the lady up, take her to your favorite coffee shop, and you will forget all about everything else.

While my favorite of the series so far is Tombs of Endearment, Night of the Loving Dead would be my second favorite if only for the darker turn the book takes. It makes it stand out from the previous books and makes me curious as to what future books in the series will be like. Should you decide to take a chance on the Pepper Martin mysteries, keep in mind that the current book picks up almost immediately after the last one left off, so they should be read in order. Pepper Martin makes her debut in Don of the Dead, in which we find out that high heels, tree roots, and uneven cemetery grounds do not make for a good mix. She trips and hits her head on the corner of a mausoleum and awakens with her Gift (Curse?). Her misadventures continue in The Chick and the Dead, in which she agrees to help a spirit prove that a critically acclaimed book was not written by the woman claiming to have written it; Tombs of Endearment, in which Damon Curtis, once the hottest thing on the music scene, wants Pepper to prove that his former band mate murdered him; Night of the Loving Dead; Dead Man Talking; and the newly released Tomb With a View.
Posted by Woofer at 11:55 PM No comments: