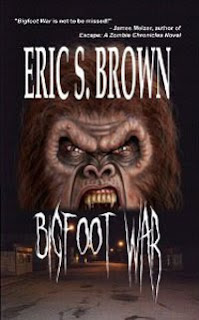 As a kid, I had a thing for all things monsters. Who didn't? My passion for dinosaurs gave way to Nessie, Yetis, Bigfoot, etc. In fact, for awhile I even entertained fantasies of becoming a monster hunter. I was going to be the one to prove all these mythical creatures existed. Well, that didn't last long, but I never lost my interest in these creatures, which is why I just had to read Eric S. Brown's Bigfoot War.

As a kid, Jeff Taylor witnessed something no kid should ever have to go through—the murder of is father and younger brother. The authorities chalked it up to a bear attack, but Jeff knew the truth. Now, all grown up, Jeff is back for revenge on the creature that killed his family.

When Jeff reveals the real reason he's come home, he is greeted with ridicule and disbelief, but the townspeople rapidly come to realize that Jeff speaks the truth. There is a blood-hungry Bigfoot roaming the forests surrounding their town. With the help of Sheriff Becca May and her deputies, they dispatch the killer, but it soon becomes apparent that the one they killed is not alone. According to the town "medical examiner", the markings on this creature label it as either a "holy man" or an outcast, and based on the reaction of the other creatures in the forest, it's a safe bet to say they killed the leader of the Bigfoot community. They are angry, and they want revenge. Are Becca and her team of deputies enough to save the town's residents from an army of furious sasquatch? Can they hold back the army of furred warriors long enough for help to arrive?

I wasn't disappointed with Bigfoot War, but I did have one issue with the book. Reading it, it quickly becomes clear that Brown has a blatant disregard for the reader's emotional attachment to the characters they encounter in the book. Just when you begin to like a character or feel sorry for what they have endured, the character is gone, a victim of the furry fury that is laying waste to the town. It literally becomes a guessing game as to who will see things through to the end. Once you realize that you shouldn't invest any emotional energy in the characters, you can enjoy the ride. . . and what a ride. The book is a fast-paced roller coaster ride of savage fury, blood, and guts (yes, I'm a gore whore) that will have you turning the pages long into the night. The visuals Brown creates are vivid, and it plays like a movie in your mind. In fact, the book reads like a detailed treatment for a movie and does bring to mind the B-movies I so loved growing up, and still love to this day. It screams for a sequel, which I hope Brown is considering. If have a love for gory horror films and like your books fast paced, I can't recommend Bigfoot War enough.
Posted by Woofer at 10:29 PM