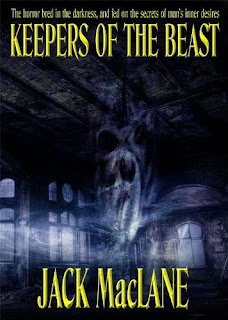 One of the best things about the Kindle is the resurfacing of so many out of print books that you would only be lucky enough to acquire should you stumble across a copy in a used bookstore or by paying an exorbitant amount of money through a second-hand deader. Jack MacLane's Keepers of the Beast was originally published in 1988. I was in college at the time, and was just beginning to get into horror fiction. I was a voracious reader and read as many books as I could get my hands on, but some managed to slip through the cracks. This was one of them.

When Barry Shannon's younger brother is murdered, Barry wants answers. . . and revenge. The first half might prove difficult; the second half won't be a problem because he is a U.S. Government-sanctioned assassin. The agency Barry works for has agreed to give him the time off that he needs to complete what needs to be done, but they also make it known that if he chooses to pursue this, he goes in alone. Driven more by feelings of guilt than the desire to see justice done, Barry takes his leave.

His investigation leads him to a small college town in Texas, where his brother was enrolled in the university. At first, after talking to one of Tod's professors, it appears Tod just happened to be in the wrong place at the wrong time, but after talking to one of the students, Barry is led back to the professor, who lied about how closely he knew the younger man. It seems Tod was involved in some sort of grant research, and Professor Phillips was his faculty advisor. Curious to know what kind of research his brother was doing, Barry checks out the younger man's apartment. When he arrives he finds the place is being trashed by two men who are obviously looking for something. When he confronts them, he comes face to face with something from the darkest depths of nightmares; one of the men appears to be part animal. The two men escape, and when Barry looks around the ruins of his brother's apartment, he realizes that they are somehow connected to the research his brother was doing for Phillips. He's only able to assemble small pieces to a larger puzzle, a puzzle that deals with demonic entities and possession. Barry is left wondering what the hell his brother had gotten himself involved with.

Sara Lansing is a reporter for the local paper. She's getting antsy and bored covering the local news—not much ever happens in town—and is seriously considering putting the town behind her and moving on when a bunch of cattle are mutilated. Her reporter's instinct tells her there's something more behind the attacks other than a crazed drifter (as the sheriff would like her to believe). She thinks that cracking this story will open up doors for her on the national news scene, but what she uncovers during her investigation might prove to be too sensational, not to mention utterly unbelievable, to be ever be printed in anything other than a supermarket tabloid.

Tommy Sloan is just a kid being raised by his mother. His father went out one day and never came back. Tommy is convinced his father is at the house at the end of the road, the house where it is rumored some crazy people live, but he's always been too afraid to go and check it out. When his mother disappears, he becomes even more convinced that she and his father are together in that house, and if he ever wants to see them again, it is up to him to go down there and bring them back.

Three lives are about to be drawn together by a nightmare none of them could have ever imagined, and in order for any of them to survive, Barry will be forced to battle the monster within himself, the monster that made him what he is today. Can he do it, or will his inner monster be seduced by the darkness and the promise of power beyond his comprehension?

Never having read anything by MacLane, I wasn't sure what to expect. I admit I approached this with a little apprehension, especially after having read quite a bit of the horror fiction published in the 8os, so much of which was story driven with stock cardboard characters. I was surprised with Keepers of the Beast, as the story is more character oriented. That's not to say that the story drags, because it doesn't. The details that flesh out the characters, making them fully realized individuals, are woven seamlessly into a story that moves along at a swift pace. You feel yourself rooting and fearing for the characters as the story progresses. To say that the story is realistic would be stretching it, considering the fact that it is a horror novel, but the plot is solid and I never once questioned the events as they unfolded within the fictional world.

As I said, this is the first MacLane novel I have read, and based on it, I wouldn't hesitate to pick up another of his books. If you are looking for a novel that will keep you reading long into the night, I would highly recommend Keepers of the Beast.
Posted by Woofer at 6:51 PM