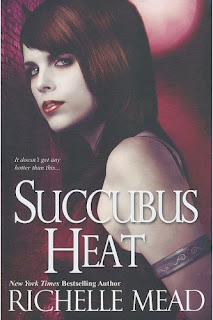 Succubus (n) - A alluring, shape-shifting demon who seduces and pleasures mortal men.
Pathetic (adj.) - A succubus with great shoes and no social life. See: Georgina Kincaid
(taken from the back cover of Succubus Blues)

That's what lured me into the world of Georgina Kincaid. The latest installment (Book 4) in the Georgina Kincaid series is Succubus Heat. It starts with Jerome, a demon with a man crush on John Cusack (although he'll never admit it) and Georgina's boss, loaning out our friendly neighborhood succubus to a fellow demon in Canada. Why? Because Georgina has been a tad bitchy since her break-up with her boyfriend, and he just can't deal with her in this mood.

While on assignment, Jerome is kidnapped and Georgina and the rest of the lesser immortals under Jerome's command suddenly find themselves stripped of their abilities. Faced with a mortal existence after centuries of immortality (not to mention the ability to shape-shift a killer wardrobe and perfect hair), Georgina experiences a brief agoraphobic episode, where she is left wondering if she now faces the real possibility of dying. On top of this, she must also face the fact that there is a chance that Jerome will never be coming back, as the Demonic Powers That Be, while concerned with Jerome's disappearance, seem more concerned with finding a replacement. Georgina wants Jerome back and sets out to find him. In her search, she is aided by ex-boyfriend Seth, psychotic ex-boyfriend Roman, and current boyfriend Dante.

Seth is the one who got away, and while they are no longer together, it is obvious they still love each other. Faced with Seth and the lack of her succubus abilities, Georgina realizes she can now be with Seth in the one way they couldn't be with Seth before for fear of draining his life force -- one of the downfalls of having sex with a succubus. The only things standing in their way is Georgina's current boyfriend and Seth's current girlfriend, Maddie Sato, who also happens to the Georgina's best mortal friend. Does she put aside her investigation and her relationship(s) to be with Seth? Not answering that.

Does she find Jerome? Does Seattle fall under the rule of a new Demon? Not answering those either. You'll have to read to find out. If you are new to the world of Georgina Kincaid, you have a month's worth of reading ahead of you (that's averaging a book a week).

Let me start off by saying that this series is not one I normally would have picked up, as I am a die-hard horror buff. But sometimes something about a book grabs you, whether it be the cover, the jacket copy, whatever, and you pick it up. I don't regret starting this series, as Succubus Blues was excellent. Each book just gets better, and your find yourself rooting for the supposed bad guys (aren't demons and vampires supposed to be evil?). The books are well thought out, and well written. There are just enough questions asked to keep you reading. And there are some questions that keep you reading into the next book. Despite things that happen, you can't help but hope that Georgina finds her happily ever after. So many readers I've seen posting on the series want it to be with Seth? Me? Originally, like everybody else, I was hoping it would be with Seth, but that won't happen unless Georgina can find the loophole in her contract (I'm not saying anything more on that -- you'll have to read to find out what I'm talking about). But now? I'm hoping Georgina's appeal is enough to reform Roman. After all, once he came back into her life a piece of her dream of happily ever after came true (you'll have to read Succubus Dreams to find out about that).

Recommendation: Highly recommended.
Posted by Woofer at 9:27 AM No comments:

Well, when I signed up for this, I wasn't quite sure what to do with it, but now I've made a decision, for those who care to know. Since I've picked up on my reading in the past few months, and I've been getting back to my writing, I will be posting my thoughts on books as I've finished them, and post some of my current projects in progress to get some general feedback -- providing I can get some honest criticism. I'm almost finished with Richelle Mead's Succubus Heat, so that will probably be my first review. Look for it in a couple of days. Later tonight, I'll post the opening of a new short story I'm working on.
Posted by Woofer at 10:47 AM No comments: