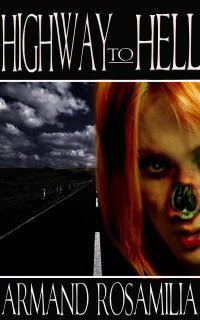 I am rapidly developing a love of all things zombie, especially since my publishing debut was in a zombie-themed anthology, and my second story (to be published in June) will also be in a zombie-themed collection. Therefore, I think it's only natural for me to check out what else is out there. One of the books that I downloaded a few months ago and kept putting off in favor of something else is Armand Rosamilia's Highway to Hell. I should have put it off a little bit longer.

Now don't get me wrong. It wasn't a bad book, or badly written for that matter. It's just that I'm a traditionalist when it comes to zombies. It's one of the reasons why I can't stand to watch the re-imaging of Romero's Dawn of the Dead. Zombies are supposed to be slow-moving shamblers, not corpses on speed ready to run a marathon. And they certainly don't have. . . Well, I'm getting ahead of myself.

As with most zombie fiction, Highway to Hell is a survival story. The central character is Randy, and he drifts from town to town looking for other survivors, for a safe haven. What he finds is Becca. Or that's the name she gives him. Becca seems to live in a constant state of denial, claiming she can be whoever she wants to be, names don't matter much anymore. And why be truthful about the nobody existence you lead before the dead started walking. You can be anybody you want to be. Randy has been alone for so long, he has it in his head rather quickly that he and Becca are going to set up house together. It quickly becomes apparent that Becca has ulterior motives. She's a user, and very quickly reminded me of the bimbos in Zombieland. I so wanted them to get chomped much the way I want Becca to get chomped. As the story progresses, Becca's bitch-ness becomes more apparent; Randy is trying his best to make life, such as it is, more bearable for both of them while Becca is only concerned about what's best for Becca. There's one point in the story where she actually abandons him in a zombie-filled hospital with little means of protecting himself. You'd think this guy would wise up after awhile, and just when you think he's about to, Becca the slut distracts him with the promise of sex. Does Becca's bitchy selfishness earn her a justly deserved zombie chomping, or does Randy's little head lead to his demise? You'll have to read it to find out.

Reading Highway to Hell, I got the impression that Rosamilia was going purely for shock value, which I think is the story's downfall. As I mentioned earlier, I'm a traditionalist when it comes to zombies. The should be slow-moving and hungry; they should not be sprinters, they should not be jumpers, and they most definitely NOT be sex crazed. Rosamilia's zombies are slow, they are hungry, and they most definitely are horny. In fact, the book opens with two zombies gang-banging a girl barely alive: "Randy watch, repulsed as the two male zombies took turns dead-fisting the barely-alive girl anally." I knew right then and there I was in trouble. Don't get me wrong; I am not a prude. I just have MAJOR issues with sex in horror. I find it to be a poorly timed plot device to catch the "victims" with their pants down, so to speak. And in this instance, to start a book that way, it has to be done purely for shock value, an attempt to push the gross-out factor to the limit. In this case, it failed miserably. I wasn't shocked by it, but I was disgusted by it, but not in the way it was intended. I merely rolled my eyes, took a deep breath, and read on, hoping things got better.

The sex aside, Highway to Hell is not a bad story. The character of Randy is likable enough (even when you want to smack him upside the head to wake him up), and you keep hoping Becca will do something to redeem herself so that you can like her. The descriptions are rich in detail, making it very easy to envision the desolate city landscape in which the story takes place. However, I did feel the scenes of domesticity slowed the pace of the story, just short of plodding along. Once you pass the halfway point and the apartment building is left in the dust, the pacing increases to a rather explosive climax that is worth the wait. All in all, I feel this is an admirable effort on the author's part, and if you are a die-hard zombie fan that just has to read every worthwhile piece of zombie fiction that is published, Highway to Hell is worth adding to your library. However, if you prefer your zombies to be more traditional (a la Romero), you might want to pass this one by.
Posted by Woofer at 8:53 PM