Not Since PSYCHO Have Showers Been This Terrifying 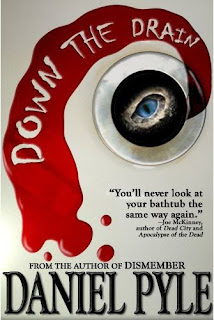 With the pile of books that I have waiting in the wings, it's rare that I "borrow" books from people, and when people recommend books, I usually make a note of it and maybe I'll get to it, maybe I won't. Daniel Pyle's Down the Drain came recommended to me by a friend, and at first I was going to pass it by, but then I saw it was a small file (yes, I read it on the Kindle), and therefore knew it would be a quick read. I never expected to become so engrossed with it that I wouldn't want to put it down. I will note, however, that after the first chapter, I almost did put it down. I'll get to that later.

When Bruce's cat disappears, he's more than just a little upset. The cat has been a part of his family for over ten years and his only real friend since his girlfriend walked out. She's nowhere in the house, and the only thing he can think of that might explain her disappearance is that she had somehow managed to sneak out and she was lying dead in a ditch somewhere. Never in his wildest dreams would he guess the truth of what happened to his feline companion. But he's about to find out. It seems there's something living under Bruce's house. Well, that's not exactly right. There's something living in the plumbing, something that surfaces through the drain in the shower. There's really not much more I can say without giving too much away, but suffice it to say, there is a showdown. Who wins? You'll just have to pick it up to see.

I was kind of puzzled initially when I started reading Down the Drain, figuring I was going to be reading the story from the thing's point of view, but it didn't take long to realize that the first chapter is written from the POV of a cat. So we, the reader, know exactly what happened to Bruce's favorite feline. And this is where I almost put the book down. You see, I'm a sucker for animals. Yes, I love me some horror fiction, and you can maim, mutilate, butcher, cannibalize, and torture as many people as you want and it doesn't bother me (yes, I'm sick, I know it), but pleasepleaseplease leave the animals alone. Kill off an animal and you run the risk of losing me as a reader. That's just the way I am. BUT I persevered with this one. Why? It was short. I finished it in about an hour, hour and a half tops. And because my friend said she had really liked it.

Once I got past the kitty killing, I admit I enjoyed Down the Drain. The central (only) character is likable enough, and the creature, as far-fetched as it was, was interestingly original. I did find it a tad predictable, but I pushed on hoping to find out more about the origins of the creature. Yes, it was what I thought it was, but I wanted to know HOW it came into being. Unfortunately, that is never explained. It was well written and well plotted, and with an ending that leaves it wide open for a sequel. Pyle is an author I will definitely be reading more of—provided he stops killing defenseless animals in stories. If you have an hour or two to kill, I would definitely recommend checking this one out.
Posted by Woofer at 12:02 AM