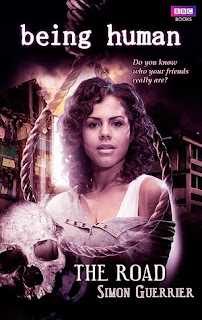 I love the BBC version of BEING HUMAN, so when I saw there were several media tie-in books, I just had to had to check them out. For those of you who aren't familiar with the premise of the series, it's like a supernatural Three's Company—Annie (a ghost), George (a werewolf), and Mitchell (a vampire) share a London flat and try to pass themselves off as human. For the most part, it works, but there are those who aren't happy with the lives the roommates have chosen to lead and are doing their best to break up their happy home. While the book stands on its own, it does help to have seen at least Season 1 of the series, as there are references made to events that took place on the show.

Ever since Annie refused to go through her door to the other side, she has learned there are beings on the Other Side who are not happy with her decision. She now lives in fear, never knowing when they are going to send one of their agents to try to force her through the door. She also has developed a fear of the radio and the television, as they are a means of communication from the Other Side. When a door appears in the kitchen, Annie fears the worst, never expecting a ghost to come through it. These doorways have always been portals TO the Other Side, never FROM.

Gemma claims not to know why she is back, that she was able to escape but is afraid that they will be coming for her. She admits to having visions of a noose and a road, but she doesn't know what they mean. Mitchell suspects she knows more than she's letting on, but he can't prove it. Not yet anyway. In the meantime, he notices a change in Annie. He knows she's been afraid to leave the house because she's afraid of them, but she seems to have lost her vitality since Gemma arrived. He also doesn't think it's a coincidence that the ghost of a teenager has been seen around the hospital where he works. Something is going on, but he's clueless as to what it is. He realizes the problem is more serious that anybody realizes when he enters the flat and Annie apologizes, stating that she had fallen asleep, and ghosts don't sleep. With Annie's energy fading, it's becomes a race against time. Can Mitchell, with George's help, put the pieces of the puzzle together before Annie loses what little life she has left?

While I found the story entertaining and well written, I had to put some distance between the book and the series. Simon Guerrier has crafted an interesting mystery that will keep you turning the pages, but he has failed to capture the essence of the characters: George doesn't come across as the hyper personality that he is, Mitchell isn't the brooding addict that the show captures so well, and Annie is just flat, which is a shame because, even though she started out the show as the weakest character and my least favorite, she is one of the stronger characters who has come into her own and has become my favorite.

The failure to accurately capture the show's characters doesn't detract from the story itself, provided you approach it as a stand-alone story that happens to involve supernatural characters; however, if you go into this looking for something to tide you over until the Season 3 of the series begins (which thankfully is this coming Saturday, February 19th), you will be in for a big disappointment.
Posted by Woofer at 1:32 PM