They Get Under Your Skin 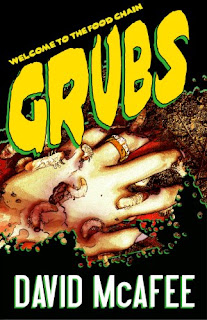 For those who have read some of my earlier reviews, you'll know that I have a thing for "When Nature Strikes Back" movies and books, so naturally, when I saw David McAfee's GRUBS, I just had to get it. I've never read anything by McAfee before, so I had no idea what I was getting into.

Eight scientists on a routine field research expedition in the wilds of Maine. Short of a sprained ankle or a broken nail, nothing could go wrong, and to make certain of that, Colby, a disgraced ex-Marine, has been hired by the firm to keep the researchers safe. It's an easy job, and it even comes with a few perks, as the lone female scientist has taken a shine to Colby, but then one of the researchers goes missing. When they find traces of blood in the man's tent, Colby immediately organizes a search party and they head out to find the missing man, who they eventually find. Well, part of him anyway. At first Colby thought it was just the boot, but then he finds the foot is still in it, and it is alive with flies busy laying eggs in the flesh.

Back at base camp, panic begins to set in as they speculate what could have happened to Jared. Regardless, Colby has decided that whatever is going on is beyond him and they need to get the hell out. The only problem is, there's no way to call for help. They can't get a signal on their cell phones, and a SAT phone wasn't in the budget. That means either walking out through the wilderness or heading out to the drop-off point with the hopes that they will be able to get a signal in the clearing. But not knowing what they are up against, Colby thinks it's better to take a small group. It will be easier to keep a couple of people safe in the wilderness than having to keep an eye on everybody.

One day out, they discover what poses the threat to them. Voracious leech-like grubs that have to ability to reanimate dead tissue. As if that wasn't bad enough, the queens, once attached, secrete a will-deadening toxin that allows them to control the living. It becomes a battle of man versus nature for survival, but can Colby protect the people in his charge against an enemy that is all but invisible until it's too late?

With GRUBS, it appears as if McAfee is trying to combine zombie fiction with "nature strikes back" fiction, and he does a remarkable job blending the two together. While the story, which was well written, moves along at a brisk pace, I did have a problem with the characters. Not all of them were fully fleshed out, and none of them were truly likable, and maybe that's because they are all painted as fallible. They have flaws. They are human. There are no white knights here, no one individual who is impervious to everything that is thrown at them. The hero of our story, Colby, is a disgraced Marine who blames himself for the death of his men while on a mission. When the first scientist turn up dead, his past comes back to haunt him and he fears that history is about to repeat itself. That in itself is fine; a character in need of redemption. But he is too often sidetracked with thoughts of the only female scientist in his charge. His feelings for her make him careless. And is she really worthy of his attentions. As much as Janice claims she is keeping her relationship with Colby a secret, she is flaunting it in the face of her ex-husband, who happens to be one of the other researchers on the team. Can we say "Bitch"? One of the scientists is a sex-crazed sociopath who has set his sights on Janice. The rest of the characters are relatively flat—cardboard characters thrown in as cannon fodder.

Was it enough to keep me from enjoying the book? No. It was one of the rare instances where what happens to the characters becomes secondary. My attention was focused more on the grubs: Where did they come from? What was their purpose other than trying to perpetuate their dying species.

If you, like me, enjoy those cheesy low-budget horror movies that were shown periodically on weekday afternoons after school in the 70s, then this is definitely a book for you.
Posted by Woofer at 10:57 PM