All Hope Abandon, Ye Who Enter In 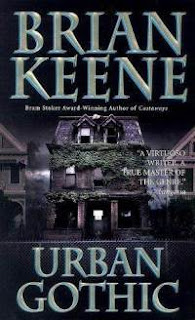 For most people, there's nothing scarier than being lost. That was the premise of The Blair Witch Project, which scared the crap out of me because I could relate to the situation the characters found themselves in. Not the part of being "hunted" by a supernatural creature, but the part about being lost in the woods. It has happened to me. There's nothing more terrifying than not knowing where you are going, if you are constantly going around in circles, going the right way to freedom, or working your way deeper into the wilds. And that's in the daylight. Now imagine being in that situation in the dark of night. If you can't relate to that, how about a corn field maze? An amusement park fun house? Or something as simple as an unfamiliar neighborhood. That's what you will find in Brian Keene's Urban Gothic.

Kerri and her friends are on the way home from a concert when her boyfriend, Tyler, gets it in his head to score some drugs in order to keep the good mood going. Everybody just wants to go home, but Tyler's driving, and he claims the guy is a friend and it's not far. However, when a closed road causes him to detour, he gets himself all turned around and they find themselves in one of the seedier parts of town. As if that wasn't bad enough, the car picks that moment to give up the ghost. Insisting that he can fix it, Tyler forbids anybody calling for help, but when a group of locals approach them, they panic. They run straight for the abandoned house at the end of the street despite to other kids telling them not to go in there.

From the moment they get inside, they realize they are in trouble when the door locks behind them. Despite the rundown condition of the house, the door is stronger than it appears. When they decide to search the house in order to find another way out, they are set upon by a giant of a man, or so they think. Tyler and one of the girls are killed immediately, and Kerri and her remaining three friends run deeper into the house in order to avoid meeting the same fate. They get separated, and soon discover that the house is rigged up like a carnival fun house, with sliding panels and trap doors. They also soon realize that what they are up against isn't just one psychotic killer, but multiple generation of deformed mutants that have lived beneath the house longer than anybody knows. Driven by fear and a desperate desire to stay alive, the four remaining friends search for a way out, but in order to reach it, they must pass through the mutant lair. Can they do it?

In the meantime, the neighborhood kids who had approached the car know the house's reputation. They don't know what lives there, but they do know that whoever goes in is never seen again. Feeling partially responsible, they call the cops, but the police are all too familiar with the house as well, and when they don't show, the kids decide to take matters into their own hands. Somebody has to help those other kids, and it looks like it's up to them. Will Leo and his friends be able to gain access to the house and help those trapped within, or will they, too, become victims of the house?

Reading Urban Gothic, I was reminded of one of my favorite movies, The People Under The Stairs (yes, I'm a freak, I admit it, but I love Wendy Robie and Everett McGill in that movie. It's kind of like Lucy and Ricky on acid.). The house Keene has created brings to mind the creepy castles of Gothic fiction, with their secret passageways and miles upon miles of tunnels running beneath them. Those castles and the ghosts that haunt them are tame in comparison. Keene's house is inhabited by a tribe of cannibalistic freaks, which he paints with a grim brutality that will have you looking over your shoulder as you read. His human characters are painted with that same gritty realness that will have you on the edge of your seat as they make their way through the house looking for a way out.

As much as I liked Urban Gothic, there were certain things that stood out as problematic, at least for me. Keene reveals that these mutants have been around a long time, longer than the town has been in existence, but that is the extent of it. We are never informed as to the origin of these creatures, which I found disappointing. I kept hoping that the kids would stumble across something that would reveal the origin of these monsters. Given that the house appears larger on the inside than is perceived from the outside, you wonder if maybe it's a portal to another dimension. There was also a moment where I thought Keene might be attempting a Cthulhu mythos tie-in. There's nothing definite, which was frustrating to me as a reader.

The other issue I had with these mutants is that some of them spoke English in complete sentences. To me, this would imply that they had more contact with the outside world that we are led to believe. One of the questions that is raised by one of the characters in the book is what do these creatures live on? Their sole sustenance can't be the chance individual who happens to stray into their lair, and there aren't enough rodents to keep their race alive. Are they working with somebody from the outside, somebody who regularly lures unwitting victims to their demise? This would help to explain how they can communicate with their victims. We just don't know, and for me, it ruined the credibility of these mutants. I would have preferred it if they stuck with grunts, groans, and moans as a means of communication. If language was necessary, they should have spoken in a fragmented dialogue.

All in all, however, I did enjoy Urban Gothic, and would highly recommend it to anybody who doesn't mind raw, brutal, graphic horror fiction.
Posted by Woofer at 8:45 PM