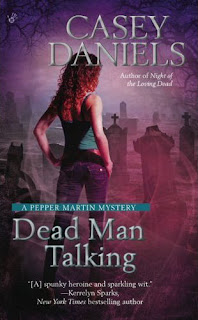 Pepper's back, and I wish I could say better than ever, but this outing in the Pepper Martin Mystery series just didn't do it for me.

For those of you who follow the series, we left Pepper in Florida, recovering from the psychological aftermath of having her body hi-jacked by a love-lorn spirit and the physical effects of being shot. When Dead Man Talking opens, Pepper is back to work in Cleveland, but not at Garden View Cemetery. This outing finds her at the less glorious Monroe Street Cemetery (even the name is boring). While it will never be another Garden View, Pepper has been put in charge of the restoration of Monroe Street. And for those of you who know Pepper, this is not something she is looking forward to. Heaven forbid she should break a nail while weeding.

As if that wasn't bad enough, her big boss has decided to make the restoration a little more interesting by turning it into a reality television show, Cemetery Survivor. Seems Pepper is to be the leader of one of two teams. When her team shows up, she's almost ready to ditch the project altogether because she will be in charge of a group of petty offenders who are on probation. If it wasn't for the members of Team One, Pepper would have scratched the whole thing, but the opposing team is made up of all the high-brow women that run in the same circles Pepper used to run before her father disgraced the family but committing insurance fraud. Pepper has something to prove, to herself and to those stuck up old biddies. However, being surrounded by a group of jailbirds is a constant reminder to Pepper that her father is doing time in a Federal Prison. Even though she has been forced to get a job in order to survive, Pepper has been in denial over the whole situation involving her father, who has been calling constantly, hoping Pepper will come and visit him. But a Pepper Martin Mystery wouldn't be complete without a ghost requesting her help with something.

In this case, the ghost is Jefferson Lamar. When he was alive, he was the warden for the local prison. He wants Pepper to find out who framed him for the murder of a young, female coworker. She reluctantly accepts because she knows how pushy ghosts can be when they want something. As Pepper tries to balance her social life (she's finally got Quinn where she wants him—in bed), the cemetery restoration, and the investigation, she finds herself having to go up against hardened criminals, another reminder of her father's situation. Will Pepper come out of this one in one piece, or has she finally bitten off more than she can chew?

So what was the problem? After reading Tomb of the Loving Dead, a darker and slightly more serious adventure for Pepper, this one just seemed to fall flat. The whole reality television show concept didn't work for me, and the fiery Pepper that I have come to know and love seemed more subdued. It was as if getting shot and almost having her body stolen took the spark out of the character. It makes me wonder if Daniels is teetering on the edge, trying to decide to keep the series light-hearted and campy or to take it in a more serious direction.

Has this book ruined the series for me? Absolutely not. Every successful series has its weaker installments, that one book where they flounder as the character (and author) reach a turning point. For me, that's what I see this book as. Besides, certain things happened in Tomb of the Loving Dead and I am curious to see if they will be revisited. Will Pepper ever use the ability to leave her body again? What were those creepy shadowy things that she kept seeing. I'm hoping those aren't done deals never to be seen again.

Would I recommend Dead Man Talking? Most definitely. While the books do stand on their own, I think you gain a fuller appreciation for them if you have read them all. Sometimes characters and situations from previous books are referenced to, and if you haven't read them, you might find yourself sitting there and scratching your head, wondering what the hell she is talking about. With that said, and hopefully without spoiling things too much, I am looking forward to the next installment of this series, Tomb With a View.
Posted by Woofer at 8:51 PM