No Safety in This Asylum 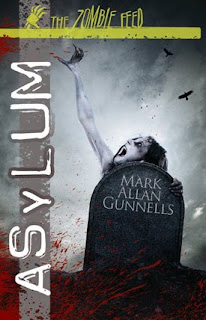 When browsing the shelves of the bookstores (physical and digital) for the next book to read, I am always on the lookout for promising new authors. One of my recent discoveries is Mark Allan Gunnells. I first met Mark on Facebook, and I was anxious to read something he had written. At the time, there had only been one publication, and copies were no longer available. When he announced the release of Asylum, I snatched it up and put it at the top of my TBR pile. The fact that it was a zombie was a plus. As I mentioned in a previous review, zombies were never my thing, but since my first sale was also a zombie piece, they are fast becoming a favorite.

Asylum is a gay club owned and run by a matronly drag queen, Madam Diva. When the story opens, Curtis is hanging around the outside of the club while his friend Jimmy is giving some guy a blow job in the front seat of a car. The poor guy doesn't have a chance to climax before he is pulled from the car by a gang of what is first thought to be fag bashers -- that is, until Curtis and Jimmy see that the guy is literally being eaten by his attackers. In a panic, the friends race back to the club with the zombies in hot pursuit. Safely inside, they relate to the few stragglers still in the club what they witnessed outside. They are able to get through to the police, but the police are being inundated with calls from all around the city and it will be awhile before anybody can get to the club, so they just need to sit tight. It now becomes a waiting game. . . Will the police arrive before the zombies break in? Or will the zombies break in first? And will they be able to keep it together long enough to be rescued?

Mark Allan Gunnells is a remarkably gifted writer. In 90 pages (yes, Asylum is a novella), he has accomplished what it has taken other more noted authors twice as long to do, and that is create a realistic setting and introduce a cast of fully fleshed out, believable characters that you truly come to care about (my personal favorite was Madame Diva). While the story structure is straight out of Romero's Night of the Living Dead in that it's a group of strangers finding themselves trapped in an unbelievable situation, it is Gunnell's characters that breath new life into what could have been a tired rehash of an old story. The narrative moves along at a smooth, even pace, and the switches in point of view are natural and seamless.

My only complaint with Asylum is that it was too short, but if this is a sample of what Gunnells can do with a short form narrative, I can't wait to see what he can do with a full-length novel. Gunnells is definitely a writer to watch, as I have a feeling he has a future ahead of him. So if you happen to find yourself bored one afternoon with nothing to do, I suggest you pick up a copy of Asylum. I don't think you'll be disappointed. I know I wasn't.
Posted by Woofer at 8:58 PM