There's a New Witch in Town 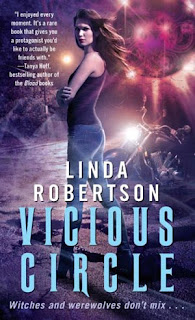 Linda Robertson's Vicious Circle was recommended to me by a friend who knows my fondness for werewolves. Seeing it was another urban fantasy series, I kind of rolled my eyes. I've been reading way too my UF recently, and I really wanted to concentrate my energies on my true love — horror. I was tempted to pass, but then I noticed that Book 4 of the series was scheduled for publication, so I figured there might be something worth looking into. It had, after all, made it to Book 4. I wasn't disappointed.

Persephone Alcmedi's simple life is about to get a whole lot more complicated. She's a witch living alone in an isolated farmhouse; she writes a syndicated newspaper column on supernatural awareness, and once a month on the night of the full moon she kennels a small pack of werewolves so they won't bring harm to innocents. Her sanctuary has been invaded by her strong-willed grandmother, who has been kicked out of the nursing home and has nowhere else to go. She finds out that Johnny, the "leader" of the pack of werewolves she kennels and lead singer of a goth-metal band, has a MAJOR crush on her. Her grandmother, who has always believed weres and witches should not mingle, encourages a "fling" with Johnny, which doesn't set well with Persephone. Yeah, he's hot, but he also intimidates her. As if that wasn't bad enough, her friend, Lorrie, a werewolf who had at one time kenneled at her house, is brutally murdered. The High Priestess of a local coven reaches out to Persephone and wants to hire her to avenge Lorrie's death. She neglects to mention, however, that the party responsible for Lorrie's death is a powerful vampire in service to the local Master Vampire. In over her head, Persephone must enlist the aid of her grandmother and her werewolf friends if she is to have any chance of getting out of this alive.

Vicious Circle, like many (if not all) urban fantasy novels, is set in the modern world, but where the ghoulies and ghosties and things that go bump in the night are real and people are aware that they exist. As this is the first novel of a series, Robertson wisely limits the locales where the action takes place, which allows her to introduce in depth all of the key players that will carry through most of the other books [yes, once I decided I was hooked on this series, I cheated and looked ahead to see who stays and who goes (more importantly, who stays)]. Her characters are not superheroes; they are regular Joes who happen to be supernatural creatures. Persephone is a witch who entertains self-doubt when it comes to her powers. When push comes to shove, she often hesitates, questioning whether or not she is strong enough to do what needs to be done. Johnny, drop-dead gorgeous and can have any woman he wants, only has eyes for Persephone and sometimes lets jealousy rule his actions, which leads to potentially dangerous results. Grandma (we LOVE Grandma) has the potential to be a power to be reckoned with, as she is very blunt, says what she means, is sometimes cryptic the way grandparents can be, but recognizes her own failures where her granddaughter is concerned. Her spunkiness reminds me of Helen Hayes, and if allowed to let her hair down (which I hope does happen, as I think it would be a hoot), I could see her being a slightly softer version of Sophia from Golden Girls.

The plot is relatively straight forward as well, with minimal twists (some of them predictable), but I can easily overlook this in the first book of a series, as it allows the reader to become familiar with the characters, their strengths, their weakness, and their quirks. Robertson wisely leaves some questions unanswered, successfully (in my case, as I will be reading the rest of the series) spurring the reader to continue the journey with these characters.

The only drawback to the book was, in my opinion, the werewolves. Like so many urban fantasy novels that features werewolves, the transformation from man to beast results in an actual wolf. Just once I wold love to find an urban fantasy series that uses the traditional man/beast lycanthrope, a half man/half beast hybrid like the wolfman. However, since this currently seems to be the norm, I guess I'll just have to accept it.

All in all, Linda Robertson's Vicious Circle was an enjoyable first outing with characters I hope to see more of for a long time to come. If you are a fan of urban fantasy and have not yet checked out this series, I would highly recommend it.
Posted by Woofer at 12:04 PM