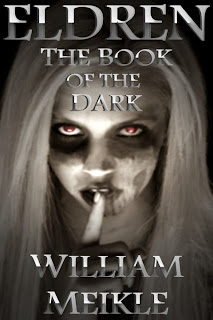 In the beginning, God created Adam and Eve, right? That's what we've been raised to believe, but in William Meikle's Eldren: The Book of the Dark, we will learn otherwise.

When Jim Kerr and his wife win a week-long vacation anywhere within Britain, Jim is hesitant to accept the prize. It needs to be claimed and used within the month and his wife is expecting their first child. Surprisingly, it's his wife who urges him to accept, because once the baby is born, there won't be any time for themselves. Where they eventually find themselves is in an isolated cottage on the shores of Scotland. Located near the cottage is a burial mound, at the top of which is a large iron cross. The inhabitants of a neighboring village claim it is a war memorial and it's nothing to worry about. Beyond that, they refused to talk about it. A windstorm that night blows their laundry all over the place, and Jim, in his attempt to retrieve an article of clothing from the T of the cross ends up dislodging it, awakening the inhabitant within. His wife is bitten and loses quite a bit of blood before Jim dispatches the creature. He rushes his wife to the doctor, but she cannot be saved. Worse for Jim, neither can his son. And so begin Jim's nightmare.

Jump 15 years, and two boys venture into the local haunted house. In the basement is some sort of military shelter, and beneath that, another two levels of secret rooms. While exploring, the stumble upon a coffin containing skeletal remains impaled on a gleaming sword. One of the boys, thinking the sword might be worth something, removes it, allowing the coffin's inhabitant to awaken. One of the boys is killed, the other runs like hell, but not before snagging an old leather-bound book that he found within the coffin.

Tony keeps quiet about the death of his friend. After all, who would believe him if he said the other boy was killed by a vampire. Even with the book as evidence, he probably still wouldn't be believed. The book, it seems, is some sort of bible, but unlike any bible Tony has ever seen. It reveals the first creations, Yoriah and Eriah. They were the first, and God told them not to eat of the flesh of the Garden. The serpent tempted them, however, saying that while they could not eat of the flesh, God never said anything about the drinking of their blood. And so the first vampires were born. And one of them was now loose on the town.

Joining forces with Brian Baillie, Margaret Brodie, both teachers from the local school, and an escaped psychotic killer, the band of strange allies attempt to bring down the vampire, but they don't realize until it is too late just how wide spread the problem has become. Who will be the victor in this battle between good and evil? Can the small band of humans defeat the growing vampire horde, or will the vampires triumph in their attempts to slowly wipe the Sons of Adam from the face of the earth?

After reading ad nauseam about sparkly, angst-ridden teen vampires looking for love and romanticized Fabio inspired blood suckers, it was a pleasure to read something that gave the bite back to the vampire. What I enjoyed most about Eldren: The Book of the Dark is Meikle's attempt to create his own origin of the vampire. Their origin isn't questionable, and they aren't corpses possessed by demons. They are God's children who have fallen out of favor because of acts that were performed that went against what the Creator had set forth.

I have read a few other works by William Meikle (although not as many as I would like to, but I am slowly remedying that -- so many books, so little time), and this book stands out when compared to the others I have read in that he takes the time to develop the characters, fleshing them out so you can sympathize with and root for them as they go up against overwhelming odds. I went into this expecting a light read that concentrated more on story than on character, and was pleasantly surprised to see that careful attention was paid to both.

The story itself is similar to most tales of vampires prior to this recent move to romanticize the undead, that of man versus vampire. But more than good versus evil, there's an underlying theme of redemption that runs throughout the book. Because of that, there are some unlikely allies that emerge as the story progresses.

I enjoyed Eldren: The Book of the Dark, and if you are looking for a return to a more traditional type of vampire tale, but one that still has a unique ring to it, then I would highly recommend .
Posted by Woofer at 9:54 AM