What's a Witch to Do? 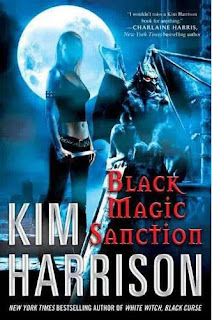 When we last left Rachel Morgan, her dealings with demons and her reluctant use of black magic left her shunned by supernatural community known as The Hollows. However, the Coven of Ethical and Moral Standards isn't content to leave it at that. The Coven views Rachel as a threat, and they will do anything within their power to see that that threat is eradicated. In their attempts to bring Rachel in for a nonpublic trial of her "peers", they do not even consider the safety of innocent bystanders, which says something about the Coven of Moral and Ethical Standards. They have none. It becomes obvious that the Coven poses more of a threat to the safety of the community than Rachel does, from a public attack in supermarket to demon summoning to waging an all-out war against the church and threatening Rachel's family and friends.

And at the heart of it all is Nick, Rachel's lying, thieving, backstabbing ex-boyfriend. If it wasn't for Nick telling the Coven that she has the ability to twist demon magic, she wouldn't be in this predicament. But in order to survive the Coven's assault, she must put her trust in Nick. Coming face to face with Nick after all this time, Rachel must confront her feelings, not only for Nick, but for Pierce as well, and she must put her trust in the hands of those betrayed her in the past, namely Al and Trent. But is the help of her friends and partners enough to defeat the Coven, or must Rachel embrace that part of her she has tried to deny since finding out she was part demon?


Black Magic Sanction is the eighth book in Kim Harrison's The Hollows Series, and it is by far one of the best. All of the characters we have come to love [and love to hate are here (with the exception of David, and I still think Rachel and David would make a great couple)]. The action is nonstop, and Rachel's character, despite her emotional dilemmas she battles with regarding her love life, continues to grow as she begins to reluctantly accept that darker part of herself. Harrison has hinted in the past that there's something more to Rachel, and she comes right out and says it in this installment: Rachel isn't a witch, but at the same time, she's not a demon. So what is she? That remains to be seen.

As much as I loved this installment, I can't let it go without at least warning the reader that we do lose a much loved character as a result of the war against the Coven, which gives us just one more reason not to like them. I'm not going to say who, but just wanted to prepare you for it. With that said, I am eagerly looking forward to February and the release of Pale Demon, the next installment of Kim Harrison's Hollow's series. If you haven't read the series, I highly recommend it if you are a fan of urban fantasy. if you start now, you just might be caught up by the time Pale Demon becomes available.
Posted by Woofer at 11:01 AM