Trapped in the Snowglobe from Hell 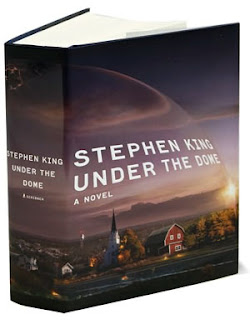 When I hear Stephen King has a new book coming out, I can't help but cringe, which is part of the reason why I put off reading Under the Dome for so long. I like King, I really do, but I prefer his older works. His newer stuff seems to be lacking something, that punch that used to chill me to the bone. His later stuff had just left me cold. In fact, I haven't enjoyed a King novel since Bag of Bones, Delores Claiborne before that, and Misery before that. And I wanted so much to like Under the Dome, I really did, but it's another novel that left me feeling cold.

The premise behind Under the Dome is simple: A small Maine town had been cut off from the rest of the world by an invisible force field. It had become a picturesque snow globe, without the snow. Or maybe a better image would be a goldfish bowl, neglected by its owner for so long that algae builds up on the inside, creating a toxic pool that will kill its inhabitants if something isn't done soon to clean it up.

One of the fish in the bowl is Dale Barbara, or Barbie to his friends. A retired, decorated officer of the US Army turned drifter, Barbie has the misfortune of temporarily putting down roots in the town of Chester's Mill. Chester's Mill, like most small towns, does not look too kindly on outsiders, which is why Barbie finds himself in trouble with the law through no fault of his own. Cleared of the charges, Barbie decides to put Chester's Mill behind him, but he's about 10 minutes too slow—the dome has come down and while he has escaped one prison sentence, he has still become a prisoner. Standing on the edge of town, he bears witness to a midair collision as a plane crashes into the invisible barrier and a pulp truck becomes an accordion when it smashes into the same barrier. With nothing else to do, he returns to town, but not before reaching out to an old army buddy, who needs to look into what's going on in the town of Chester's Mill.

At first glance, the town is quite picturesque. It's like a Rockwell painting populated by old-fashioned "Mom and Pop" stores. Modern civilization has passed it by. There is not one major chain store present in this quaint little community. But looks can be deceiving. Like all communities, there is a dark side, and in the case of Chester's Mill, the town's dark side manifests itself in the form of Second Selectman Jim Rennie, a used car salesman and a two-bit politician with delusions of grandeur. And, because of the little tiff that almost landed Barbie in the town lock-up, he is not one of Dale Barbara's biggest fans, as that little tiff was instigated by Junior Rennie (Big Jim's son) and his friends.

As Dale Barbara tries to rally the town and, with the help of the military, figure out a way to lift the Dome, Rennie sees the Dome as a means to furthering his political agenda. But not everybody stands behind Rennie; there's a small band that backs Barbie, and Big Jim targets this group and plans to use it as a means of turning the town against Barbie, but can he do it before all of his dirty secrets are discovered and exposed and before the Dome is lifted?

I'm not going to deny the fact that King is a masterful story teller, but I had some major problems with Under the Dome. First and foremost, the characters. I know you need a bad guy, but this book seemed to be overrun with them. There's a handful of characters that you genuinely like; other than that, you hate everybody else. Each time I put the book aside, I dreaded picking it up because I did not want to be soiled by the characters that populated this town. I know it can be argued that this is a sign of a successful writer, where he has created a character that you really don't want to be associated with, but you can't alienate your reader either, which I think King has done here. The characters are black and white; there are no gray characters. You either like them or you don't. And even with your worst character, there has to be something within him or her that draws the reader to them, a vulnerability, one element that speaks to you, telling you this character isn't all bad, that maybe there's a chance of redemption. You don't get that in Under the Dome. Even when something as tragic as one of the characters being diagnosed with a brain tumor, you don't feel sorry for them. You get this satisfied feeling, and that's not a good way to feel about somebody who is going to die. It makes you feel like a bad person.

Another problem I had was the size of the book. I'm not intimidated by lengthy novels; in fact, I tend to look for books with a high page count because it means I can lose myself in the author's world for that much longer. However, I feel this story could have been told in less than a 1,000+ pages. The novel takes place during the course of one week, and during that week, we see how quickly a community stricken by fear can devolve into a more primitive, every-man-for-himself state. King himself has tackled this theme before on a smaller scale with The Mist. And more recently, Brian Keene set out to tell a similar story of a town cut off from the outside world by a wall of darkness in Darkness on the Edge of Town. Keene was equally successful in showing the rapid decay of civilization when faced with the unknown, and he did it in under 300 pages. King's use of throw-away characters is what prolonged this novel, characters that appear once and are never seen or heard from again. Were they really necessary?

My other problem was the ending. It felt like It all over again. I really can't go too much into this without giving too much away, but after the BIG concluding event, the story seems to drag out as he tries to wrap things up, and it is the ending that really blew it for me.

Despite its drawbacks, the book did move at a brisk pace, for which I was thankful, before coming to an abrupt stop that left me with a case of whiplash, and then crawling at a snail's pace to an unsatisfactory conclusion.

Would I recommend Under the Dome? If you are a die-hard King fan who just HAS to read everything he has written, then yes, you need to read this. As for me, as I said before, I like King, but I haven't read everything he's written, nor do I intend to. After a string of misses, Under the Dome was the deciding factor for me. In the future, I will wait for mass market release before shelling out the big bucks on a hardcover. Or better yet, I'll wait for a reasonably e-book edition. If you choose to read Under the Dome, I would highly recommend having plenty of soap on hand. You'll need it to wash off the feeling left behind once you've rubbed elbows with the characters residing in this book.
Posted by Woofer at 10:40 AM