I Ain't Scared of No Ghosts...

...because there's no such thing as ghosts. 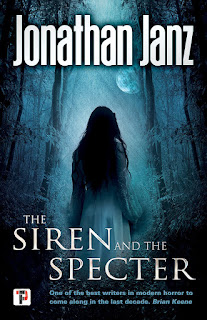 That's what celebrated debunker David Caine is probably thinking as he drives to his new assignment -- the Alexander House.

Built in the 1700s, Alexander House, like all "haunted" houses, has a history, and it's not a pretty one. Judson Alexander was a seriously sick dude with a depraved sexual appetite, and the crimes he committed left a permanent stain on the house. But that's not enough to deter Chris Gardiner and his wife from wanting to turn it into some ghoulish tourist attraction. And what better press could they receive than confirmation from one of the most celebrated skeptics that the house is indeed haunted. Caine, on the other hand, would like nothing better than to prove it all a hoax. He also hopes he'll be able to solve the mystery of what happened to John Weir, another famed skeptic who disappeared while investigating Alexander House. The man's journal was the only thing found, and that seemed to indicate that Alexander House was haunted by Judson Alexander. But is the journal authentic or a forgery created to deepen the mystery of the house?

Like any skeptic, David believes the journal is a forgery, and he hopes to disproves its claims and find out what happened to the man. Proving the house isn't haunted would just be an added bonus. But when faced with the mounting evidence, David still refuses to believe. He thinks it's all an elaborate plan cooked up by the house's new owner to make him look foolish. And discoveries made during the investigation only serve to deeply root that belief in his mind.

So is Alexander House haunted? You'll just have to read and find out.

I have to admit, I had reservations going into this particular haunted house. As much as I love Janz's writing, I've been disappointed with the last few haunted house novels I have read. They've just been a rehash of things that had been done before. But the wickedly cool cover lured me in, and I'm glad it did. Well... Ultimately.

As I progressed through the novel, I had the sinking feeling that I knew exactly where Janz was taking it, and despite the chills the book gave me, and the need to turn up the lights and check the doors while reading, I was tempted to put it aside several times. But Janz had never disappointed me before, so I pushed on, and I'm glad I did. Did it go where I thought it was going? Well... Yes. But then it went beyond. There's that two steps forward that make you believe the house is actually haunted, then that step backward that makes you question whether or not it really is. And you find yourself rooting for the house because Caine isn't really a likable character. You want to be able to rub his nose in the fact that everything he he has come to believe throughout his life has been a lie and that ghosts are real.

In fact, very few of the characters in The Siren and The Specter are what I would call likable. They all harbor secrets, and in Caine's case, his life is an open book, as we see everything from his POV. We KNOW how he treated his last serious girlfriend (so does everybody else, it seems), the same way he treated all of his relationships because the man has serious commitment issues. You get the impression that the new girl he's interested in is just toying with him because of the secret she is keeping. The Shelby family proves to be just as depraved as Judson Alexander, and even the elderly neighbor, the only character you can really come close to liking, proves to be a despicable human being. So naturally you want the house to be haunted and all these terrible people to get their comeuppance.

With all the twists and turns in the novel, you get to see Janz's skill as a writer as he weaves them all seamlessly together into a well-crafted, creepy tale that will have you sleeping with the lights on. You may go into The Siren and The Specter boldly proclaiming that you ain't scared of no ghosts, but by the time you come out, you'll be babbling, "I do believe in spooks, I do believe in spooks."
Posted by Woofer at 12:31 PM