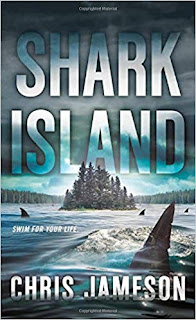 A couple of years ago, I saw this book posted quite a bit on Facebook. Since I liked Jaws and movies like Deep Blue Sea, I made note of it and knew I'd eventually get around to it. And since summer is right around the corner, I figured now would be a good time.

Typical of any shark book (or movie), there's gotta be a shark attack. Usually at the beginning. And Shark Island is no exception. The victims are a young woman and a surfer. The woman survives minus a leg, the surfer doesn't. The girl just so happens to be the daughter of a local politician. And so the attack becomes high-profile news.
The presence of and the aggression of the sharks is blamed on the seals, which seem to make the Cape their home during certain times of the year, much to the dismay of the local fisherman. A local oceanic research facility sees this as an opportunity. They present their research, receive funding, and then we jump eleven months into the future. The four-man research team is ready to carry out a field test of what we can assume they spent the last year working on. There's no putting it off a day or two, it has to be today. Why? Who knows. Logic and common sense would have them postponing the project because they're in the middle of a Northeaster. But Science must march on.

Along with the ship's crew of two, which includes the Captain, there's also a young reporter, or journalism student, who just so happens to be the girl who survived the attack back in Chapter One. She's there to document the research team's experiment. But more than that, she's trying to face down her fear of the water -- and sharks.

Whatever funding was received turns out to be money well spent, and it comes as no surprise when the experiment proves successful. Before long, the ship is liked the Pied Piper of Hamlin, leading all the seals northward toward Maine, where they hope the seals will stay on the islands the team has chosen to be their new home. The research team is thrilled to see all the seals following in their wake. But where there are seals, there are also sharks, and before long, the herds of seals become a buffet for the sharks. It takes the team a while to realize something is very wrong with these sharks. They are hyper aggressive, and before long, they've lost interest in the seals and launch an attack against the ship. Sharks win, of course. They breach the hull and the team is forced to abandon ship and take refuge on this small island with an old, rusted watchtower. Do they all make it to the island? Maybe. They hope when home base attempts to contact the research team and gets no answer, folks back home will realize something is wrong and they'll send help. But will help arrive in time? You see, the sharks are bad enough, but the tide is rising, And there's the storm surge, which will cause the water levels to rise higher than normal. The only place left to go is up as the tiny island is gradually claimed by the sea.

And the sharks continue to attack. Who lives, who dies? You'll just have to read it to find out.
I'm not going to deny that Shark Island is a page turner, because once the sharks start attacking, the narrative flies. The failing here is the lack of science, which becomes a problem when the majority of the characters are research scientists. We know part of their research is behavior modification, but that's about all we know. We know nothing of the research, the trial and errors of their experiments. We only know they've developed some sort of sound wave or beacon that has a profound effect on the seals. They abandon the locations their instincts cause them to return to year after year and swim without fear. Not even when the sharks start attacking are they swayed to break ranks and try to escape. And what is it about this mysterious sound pulse that also effects the sharks, making them more aggressive and possibly more intelligent, because they seem to be working together to bring down the ship, and later on, on their attacks on the tower.

Like any adventure/disaster novel, the characters are not fully fleshed out, as the focus is on the chain of events that move the story forward, so we don't really care who lives and who dies. We're not emotionally invested in any of them. We learn early on that Naomi, the politician's daughter and shark attack survivor, is a lesbian. To what purpose? Is it crucial to the story? No, and since she's alone through much of the novel, it seems rather pointless. It's like the author wanted to make the character a lesbian for no other purpose than to show some diversity among the characters. The same applies to Walter, one of the fisherman we encounter later on. We get the impression he's bi but is currently involved with a guy. We do get a couple of chuckles at his expense when they talk about sucking dick when the conversation between him and his friend gets a little too emotional than is comfortable for either of them. It's like the author decided to assign their sexuality to show he wasn't afraid to have gay and lesbian characters. Naomi's relationship at the beginning comes across as platonic, so why not just make the love interest a guy? And since there's been all this talk among the horror community about diversity, it comes across as a feeble attempt to placate a select audience. But Jameson doesn't cross the line to give the reader an intimate look into their lives so there's no risk of alienating the balance of his audience.

That aside, and if you don't mind the lack of scientific explanations, Shark Island is an enjoyable read perfect for a summer vacation on the beach. However, if you're the type who requires an explanation as to the what and why of the research, you're going to be disappointed and it would probably be best if you look for your shark action in books like Jaws and Meg.