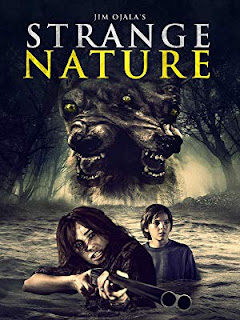 I wasn't expecting much when I saw this listed among the Amazon Prime selections, especially after getting stuck with one stinker after another, but Jim Ojala's Strange Nature took me pleasantly by surprise.

The film starts off with a typical scenario of a young mother returning to her childhood home to take care of her terminally ill father. With her is her son, who is none to happy about being uprooted from the city and transplanted to the middle of nowhere. Little do they know, they have just landed at Ground Zero for a series of genetic mutations.

They start off simply enough, with a few frogs with extra limbs being found. Mama Sweet is obviously concerned when they start showing up in greater number. After all, she has a young son to be worried about. The local science teacher explains that mutations among reptiles and amphibians are relatively common, but even he has to admit that they seem to be a larger than normal population of mutated specimens. Then the kids start disappearing. The mayor doesn't link the two incidents, opting to believe they are on the lookout for a serial killer or psychopath who gets off on kidnapping and torturing folks. The only thing is, the bodies are never found. It isn't until the Sweets' family dog give birth to mutated puppies that folks begin to wake up to the fact that there just might be something wrong. And when the first birth defect among the townsfolk occurs, panic begins to set in. A group of rowdy locals turn their attention to a deformed father living on the outskirts of town with his young daughter, who also happens to be deformed. They're more convinced that the father did something to the water to cause all these deformities so they wouldn't be the only "freaks" in town. They're no looking at the bigger picture; if they were, they'd have noticed that this is a cycle that is occurring along the river, effecting town after town after town. But there's an even bigger threat than a few local roughnecks trying to get a little rowdy. There's something in the woods, something that is responsible for all the disappearances. Will they wake up to the fact that there's something going on, something on a grander scale than what their little minds are currently imagining. or will they be the next to fall victim to whatever is stalking the woods?

The movie is kind of a slow burn for the first half, then gradually starts to pick up. While there's enough going on to hold your interest, it misses the opportunity to make a social commentary on the dangers of pollution. The questions is asked if this could be caused by the use of pesticides, but then shifts its focus to parasitic infections that are naturally occurring. But why, suddenly, are they so concentrated in one area? We're never given an answer, but it is under investigation, which means we just might be seeing a Strange Nature 2 in the future. The film also glosses over social acceptance of those who are different and paves the way for the "surprise" ending, but one I saw coming as soon as a certain reveal was made during the course of the movie. Is it worth watching? I'd say yes. Given Amazon's rating system, I'd give it 4 out of 5 stars.