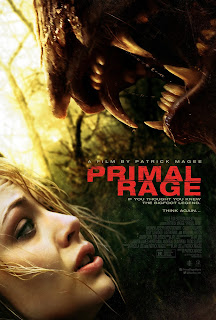 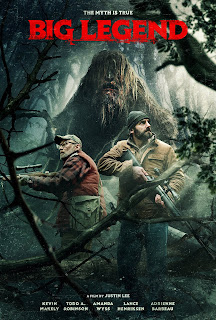 As a fan of all things Bigfoot, I'm always on the lookout for awesome films about rogue Sasquatches. The problem is that sometimes I have to endure hours of dreck before finding a pearl. Well, this weekend I did the unachievable -- I found two pearls in a row without having to filter through hours of bad movies.

The first movie, Primal Rage, came recommended to me by a Facebook friend. I'd seen the poster before on Amazon and kept bypassing it figuring it was going to be another waste of time. I couldn't have been more wrong.

The story driving Primal Rage is that of a husband and wife lost in the wilderness of the Pacific Northwest, home of Bigfoot. In their attempts to find their way back to the highway where they hope to flag down some help, they fall in with a bunch of poachers, and here, safety in numbers isn't always a good thing as the poachers come across as more menacing than any creature roaming the woods. You'd expect them to kill or incapacitate the husband and have their way with the wife, but before things can escalate that far, the group is attacked by... You guessed it. Bigfoot. Most of the hunting party is killed and the wife is abducted. My first thought at this point was the tabloid headlines: I Was a Bigfoot Sex Slave. And I wasn't that far off. Yes, there is a downplayed rape sequence with Bigfoot as the perpetrator. The remainder of the film is the hunt for Bigfoot and the rescue of the Mrs.

The production quality of Primal Rage is surprisingly good, especially when you stop to consider the film is billed as a low-budget production. The acting, while stiff at times, is passable. The setting is gorgeous. No CGI (thank God!); everything here is old-school makeup and special effects. And the creatures... They don't look like men in bad monkey suits. In fact, they are probably the best creature effects I've seen in a long time. The thing to keep in mind, though, is that these are not your traditional Sasquatches. They don't explain them as a lost race or the missing link; instead, the Oh-Mahs in this film are the spirits of dead Indian chiefs come back to Earth in a physical form, so don't expect your shy, simian-type creature; these are intelligent beasts with the ability to create and use tools and weapons, and their camouflage abilities can rival the most experienced solider or survivalist. So if you are looking for a bloody, non-traditional killer Bigfoot film, this one is definitely one to check out.

The second film, Big Legend, is one I happened upon by pure luck. What drew me to it was one of the actors -- Adrienne Barbeau. Yeah, she's been in a lot of schlock, but she's one of my favorite scream queens, so naturally I had to check it out. The other name that caught my attention was Lance Henriksen, another actor known for his roles in horror movies, and like Adrienne, he has appeared in more than his fair share of bad horror movies, so naturally I had to check it out. What did I have to lose besides an hour and a half of my time.

Big Legend opens with a couple venturing into -- where else? -- the wilds of the Pacific Northwest. While there, the guy proposes to his girlfriend and she says yes. Right away you know something is going to happen to destroy this happy moment. And sure enough, that night, while camping out under the stars, they hear something knocking against the trees. He goes out to investigate, and he ventures away from the camp. probably further than he intended, because when he hears the scream, it takes him a while to get back to the campsite. When he arrives, he finds the tent -- and his fiancee -- missing.

The film jumps ahead a year and Ty is just being released from a psychiatric facility after finally admitting to the doctors that his wife was killed by a bear. After all the release forms have signed, he looks at the doctor and more or less admits that he lied just to get released by saying something about survivor's guilt implies that somebody died. They never found his fiancee's body. Left with a bunch of questions with no answers, Ty's mother (Adrienne Barbeau) encourages his to look for answers to those questions, so he heads out to where he last saw his bride to be. He encounters a trapper on the trail of the "Big Man," and they join forces. Pretty soon, the hunters become the hunted as the creature in the woods starts stalking them, and ultimately there's a showdown between man and beast.
Lance Henriksen makes an appearance at the end of the film and opens the door to a sequel, and it even states that Ty will be back in The Monster Chronicles.

One would assume that this film, despite its name "stars," would also be included in the low-budget category. Nevertheless, the setting is beautiful, the acting is solid, and, like Primal Rage, the effects are old-school. The creature, while not as stunning as the one in Primal Rage, also looks better than some of the other Bigfoot creations I've seen, although this one reminds me more of the Swamp Thing than Bigfoot. That aside, I would still say it's worth the watch. They both are. So next time you're in the mood for a double feature, give these a shot.
Posted by Woofer at 4:04 PM