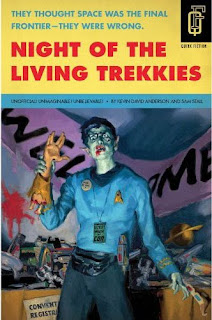 Occasionally a title alone will make me buy that particular book without having heard or read anything about it. Night of the Living Trekkies is one of those books. I'm not much of a Star Trek fan, but I have hit the conventions from time to time, and the idea of zombies set loose on the geekdom was too good to pass up. Just like the BBC series Dead Set, in which the zombie apocalypse hits and the walking dead invade the set of a Big Brother-type reality show, I loved the idea. They (the book and the TV series) could be stinkers, but I didn't care. The fact that it was zombies was a big plus. As I mentioned in a previous review, I was never much of a zombie fan, but that is rapidly changing.

Night of the Living Trekkies opens with some cute dialogue:

"Space, the final frontier. . ."
"Shut up."
"These are the voyages of the starship Enterprise. . ."
"I said, shut up."
"Its five-year mission: to explore strange worlds, to seek out new life and new civilizations. . ."
"You're pissing me off."

This had me laughing, and I knew I was hooked.

The premise of Trekkies is simple: A secret research facility located beneath Johnson Spaceflight Center in Houston, Texas, has been sabotaged. The subjects of the center have intentionally been set free, and not even a total nuking of the facility is enough to contain the outbreak. The zombies are loose and manage to find their way to the Botany Bay Hotel, where GulfCon is about to get underway.

The hero of our story is 23-year old Jim Pike, a bellhop at the hotel, and a "retired" US Army Officer. Jim has a sixth sense when it comes to enemy action, something that contributed to his early retirement from the military. Similar to Spiderman, he gets these sensations when trouble is near, a gift that repeatedly save his Unit. But when he wasn't there to save them and most of his unit was lost, the sense of responsibility became too much, and he wanted out. Now, at the Botany Bay, he has exactly what he wants -- a job with zero responsibility for others, which is why he can't understand why his "Spider sense" is tingling. He is slow to wake up to the danger, though, even when one guest complains about the poor TV reception, he discovers that the phones are out, and there's no cell phone signal. He only really begins to question when people who are supposed to be on duty go missing.

As the zombie population rapidly grows, Jim must once again shoulder the responsibility of leadership as he tries to lead a handful of survivors, which include his sister, a red-shirted (think Star Trek Engineering crew) young man named Willy Makit (Will he make it, get it? HAHA), Leia (and yes, she is dressed as slave girl Leia from Empire Strikes Back), and an overweight man who goes by the nickname Horta, to name a few, to safety. Who lives, who dies, and who joins the ranks of the walking dead? You'll have to pick up the book to find out.

Night of the Ling Trekkies is not a great book, not by any means, but it is a fun book. It is well written and the characters, while typical stock horror genre staples, are likable. There are enough nods to Star Trek, Star Wars, and Romero's zombie movies to keep the fan boys happy. And no, you don't have to be a fan boy or convention geek to enjoy the inside jokes. If you are in the mood for some light, campy, mindless fun for the weekend to relieve the stress and tension of the work week, then this book can't be recommended enough.
Posted by Woofer at 12:36 PM