SLIPPERY AS AN EEL 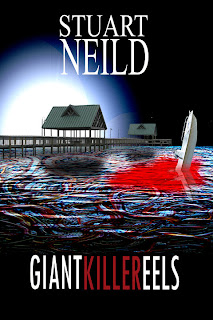 Stuart Neild's Giant Killer Eels is reminiscent of these old B movies that I loved so much. The setting is The Lake Districts of England, an area surrounded by mysterious disappearances and the home home of Old Slippery, a legendary giant eel. Like other mythic creatures, Nessie, Big Foot, and The Abominable Snowman, Old Slippery is elusive; however, unlike those who have claimed to see Nessie et al. and lived to tell about it, those who have seen Old Slippery never lived long enough to boast of the sighting.

Lured by the mystery of being the first to discover and photograph the giant eel, John and Mark, a couple of kids who feel they can succeed were seasoned divers have failed, have made "arrangements" to stay at the other's house, but instead of being true to their word, they sneak off to The Lake District in search of Old Slippery, and their parents are none the wiser. While investigating one of the rumored sighting areas, they encounter Yanick, a "crazy" eel enthusiast who claims to know all about Old Slippery and who also claims to have seen the giant eel twice.

Meanwhile, elsewhere withing The District, other people are having close encounters of the Slippery kind, and it isn't long before Mark, John, and crazy Yanick have their own encounter, but they have gotten more than they bargained for. There's not just Old Slippery they need to worry about. As the rains come down, the waters become alive with literally hundreds of. . . you guessed it. . . Giant Killer Eels.

All the trappings of those old B movies are here, from the kids in trouble, the rather eccentric enthusiast, to the military coming in to save the day. There's even a couple of damsels in distress. The characters are likable enough, but the emphasis of Neild's seems to be story progression, not character development. He doesn't disappoint with story, and pretty soon you find yourself forgetting about the unanswered questions that arise about the characters.

As much as I enjoyed the story, I did have some issues with the writing. It's not badly written, but I do feel the it would have benefited from having a proofreader or editor going through it before it was put out for public viewing, and that's purely for grammar and text flow. I found commas appearing in places that they shouldn't have been, which disrupted the flow of the sentences in which they appeared, and the wording of some phrases had me stumbling. If I had to give this a rating of between 1 and 5 stars, I would give it a 4, and that's only because of the problems I had with sentence structure and grammar.

Would I recommend this? You betcha. The thrill I got reliving the days of my childhood spent in front of the television while giant ants lay waste to a town far outweigh the minor technical issues I had with the story.
Posted by Woofer at 10:56 AM