Bells Will Ring, and the Blood is Gonna Flow. . . 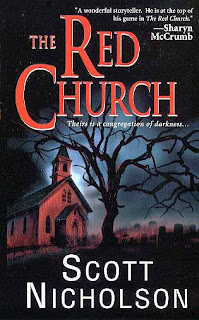 The Red Church has been sitting on my shelf for awhile. At the time that I bought it, the author was unknown to me. As a result, it kept getting moved further down in my TBR pile in favor of books published by my favorite authors. That was a BIG mistake. Rarely does a book grab me from the very beginning. Scott Nicholson's The Red Church is one of those exceptions.

Every town has that one abandoned building around which mystery, rumor, and legend spring up. The town of Whispering Pines was no different, except the building which became the subject of kids' dares to friends was a church. Built in the 1860s, the Red Church was never your traditional church. Under the leadership of Wendell McFall, the reverend preached of God's second son, whose mission it was to accomplish on earth what Jesus failed to do. There were those who followed him faithfully, until the day he sacrificed a child to further his teachings. Outraged by this act, the congregation string him up outside the church using the rope from the bell tower. Since then, the church stands abandoned, inhabited only by the ghosts of the past. . . and the thing rumored to live in the bell tower.

When Ronnie Day and his kid brother, Tim, find a mutilated body in the graveyard beside the Red Church, they believe it is the work of the Bell Monster. Sheriff Frank Littlefield also believes the church is somehow responsible for the death. He didn't find the idea too much of a stretch because, as a kid, he lost his brother to something within the church. While people in the area claim not to have seen anything, they all claim to have heard the church bell ringing, which doesn't seem possible, as there hasn't been a bell rope in the church since Reverend McFall was hanged.

When the second body turns up, Frank gets wind of the fact that Archer McFall, son of Wendell McFall, has purchased the church and has plans of re-opening the church and starting up services again. He knows something isn't right when he finds the services are held at midnight. As Frank investigates McFall, Linda Day, Ronnie's mother, falls back under Archer's spell. So devoted is she to the church, she will promise McFall anything, including the lives of her children. Linda's estranged husband, David, sees the change in his wife and senses the kids are in danger; he will do anything to keep his sons safe, even murder.

It becomes a race against time when the third body is found. Will Frank discover McFall's secret before the final sacrifice is made and Hell is unleashed on earth? Will David be able to keep his kids safe from his wife and the church, or will they become the final sacrifice?

I'm ashamed to say that this is the first of Scott Nicholson's work that I have read, although I do have others on hand, and if this is a sample of what he has to deliver, it won't be the last. From the very first chapter, you are caught up in a fast paced story that draws you forward, propelled by believable characters you come to care about. I wouldn't say The Red Church is scary, and I'll be the first to admit that might just be because I'm jaded when it comes to horror fiction, but it is a non-stop thrill ride that will leave you not wanting to put the book down until you reach the end. As I was reading, I was thinking of it more as a psychological thriller that deals with the power of religion over the masses. Was the Bell Monster real? Was the spirit of the Hanged Preacher real? Or were they the result of a highly charismatic, mentally imbalanced preacher's influence over his flock? The question is answered, and if you want to know the answer, you'll have to pick it up. If you haven't read Nicholson before, this is a good one with which to get your feet wet. You won't be disappointed. I wasn't.
Posted by Woofer at 6:01 PM