No One Knows What Goes On Behind Closed Doors 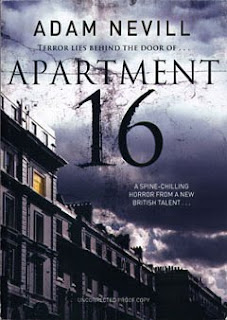 I'm always on the lookout for the next BIG SCARE, more so since the market has been flooded with defanged vampires and domesticated werewolves that have even less bite than my mother's toothless pet poodle. So when I saw Adam Nevill's Apartment 16, I snatched it up with the hopes of getting drawn into a creepy haunted house-type story. I didn't get ghosts. What I got was far worse -- in a good way.

Set in the heart of London, Barrington House is a grand old apartment building with a sinister secret. When Apryl's great aunt passes away, all of her worldly possessions, including her apartment in Barrington House, are left to Apryl and her mother. It is Apryl's responsibility to come to England and settle her aunt's affairs, sell off the belongings and the apartment, and then return home. When Apryl arrives, she is quite taken with the affluence of the building and quite fancies herself living there. She soon finds, however, that the beautifully maintained lobby is only a facade. The apartments within Barrington house have certainly seen better days if her great aunt Lillian's place is representative of the other apartments. It's obvious to Apryl that everything she has heard since arriving at Barrington House is true — Great Aunt Lillian was not right in the head. It is obvious that the old woman was a hoarder, and she had an aversion to mirrors and pictures, as the walls are bare. There is evidence that mirrors and pictures had once adorned the walls as noted by the discolorations on the walls, but they have been taken down and put into storage. When Apryl discovers a series of journals written by her great aunt, it depicts Lillian's descent into madness, but there's more to it. Much more. And everything she learns leads her to Apartment 16.

Meanwhile, Seth, a porter who works at Barrington House is being haunted by a young boy who has seduced him into entering Apartment 16, an apartment that has stood empty for over 50 years, an apartment that the other residents of the building are convinced is haunted by its former resident, Felix Hessen, an artist who dabbled with the occult. What he finds within warps his mind and soul.

After reading the journals, Apryl is determined to find out exactly what happened to her great aunt, even if it means putting herself in harm's way. Will Apryl be able to discover Barrington House's secret and what happened within Apartment 16, or will she become just another victim?

Adam Neville weaves a tightly woven tale of mystery and the occult that is guaranteed to chill you. All the trappings of a typical haunted house tale are here, but Nevill warps it and takes it one step further, twisting it into something you don't expect. While I found some of it predictable, there was enough of a new twist to keep me reading. He has created characters that are believable in your typical horror story way in that you know the heroine isn't going to act in her best interest, but you fear for her anyway. Seth is a character you can sympathize with and hope that he can be redeemed before it's too late. Even the characters that you dislike on first meeting, the residents of Barrington House, become sympathetic as the story unfolds and you learn the horror they have lived with for the past 50 years.

As much as I liked Apartment 16, I did have two issues with the book. My first issue was with the pacing of the novel. The first half moved with excruciating slowness, but there were just enough questions raised to keep me moving forward. It's like that long climb on a roller coaster. Once you pass the halfway point, it's down hill at warp speed to a satisfying conclusion that made the first half well worth the journey.

My second issue was with Seth, as you never really know if an incident he keeps reliving in an event that actually happened to him when he was a child or if it is a memory planted by the powers of Barrington House. You get the impression it is an incident that he actually experienced, and if that is the case, he was destined for Barrington House from the time he was a child. It leaves you questioning long after you've put the book down.

If you are a patient reader, I would highly recommend Adam Nevill's Apartment 16. It's a creepy tale that will have you looking over your shoulder and jumping when you catch a glimpse of something out of the corner of your eye.
Posted by Woofer at 12:09 PM