When Nature Strikes Back. . . 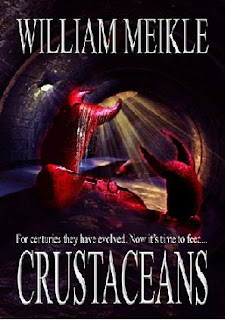 Do you remember as a child being glued to the TV while a community fought for their lives against an invading army of giant ants? Or a giant tarantula? Or a giant preying mantis? I do. I remember being glued to my seat as the giant menace appeared on screen to lay waste to the town. Even now, although the special effects of some of those movies are so hokey now that they are laughable, I still enjoy watching The Deadly Mantis, THEM!, Empire of the Ants, etc., so when I saw William Meikle's Crustaceans, a tale of giant crabs loose in New York City, I jumped at the chance to read it.

When a dead whale washes up on a New England Beach, a small team of marine biologists are called in to determine the cause of death. As they prepare to take their samples, something with the belly of the beasts manages to rip its way out and proceeds to tear part the scientists. Meanwhile, Joe Porter, a New England fisherman, is out at sea pulling in his traps, hoping to bring in enough Blue Crab to keep him in smokes and booze. His catch is better than he could ever have hoped to imagine. Amongst his haul, he notices one crab that is larger than the others, and having spent more years on the sea than he cares to count, he knows this crab is no Blue. Besides the size, this one is more aggressive than the others. He succeeds in getting it into the net with the rest of his catch and watches in horror and disbelief at the one crab rips through the entire haul of Blues. Back on shore, rather than sell the remaining crab, Porter puts it in a tank, believing there's something special about the crab.

Wanting to know what killed the team of biologists, the Government calls on the expertise of Shona Menzies, a marine biologist who specializes in crabs. What she sees on a series of videos shown to her by the head of the operation, Colonel Stark, chills her to the bone. She realizes that her father was right in his assumptions and the giant crabs are back.

While studying the immediate area and trying to find evidence as to where the crabs might have gone, they receive a call that a small group of whales washed up on a beach in Long Island, and unlike the one they are studying, these one are still alive. While they are taking off to investigate the latest incident, Joe Porter has noticed that the crab in his possession has grown dramatically over the period of two weeks. Thinking he might be able to make a small fortune selling it to one of the zoos or aquariums, loads the tank into the back of his truck and makes for Central Park to negotiate with one of the curators what he thinks would be a fair price for the crab.

The military arrive on the scene in Long Island just as the crabs eat their way out of the bodies of the whales. While trying to clean up this mess, they receive a distress call regarding a ferry that is on a collision course for one of New York City's piers. While trying to prevent the collision, they discover that the shiver is crawling with the giant crabs. Even with their heavy artillery, they are unable to destroy all of the crabs. Most of them rip their way through the hull and make their way for the city, which contains a maze of sewers, active subway tunnels, and abandoned tunnels.

And the hunt is on. Will the military and one lone fisherman be able to find and put an end to the hundreds, maybe thousands, of giant, man-eating crabs that are now loose beneath the streets of New York City, or will the city fall under the onslaught of the killer crustaceans?

Reading Crustaceans, I was transported back to the days of my youth, and was thoroughly engrossed in Meikle's story. At one point in my reading, I had to pause and wonder if maybe I hadn't missed an earlier book, as there is a reference to a previous attack in years past, however, it wasn't enough to stop me from reading. In fact, I was completely immersed in the events as they unfolded that I didn't stop to question certain "holes" until after I was done. Given that there was previous contact with the crabs, and it was Shona's father who lead the investigation, in fact, he dedicated his life to pursuing these giant beasts, I was expecting more history. Where did they giant crabs come from? Are they they result of genetic experimentation gone wrong? Are they a species that mutated after being exposed to fallout from nuclear testing? Are they survivors of the prehistoric times that have been reawakened because the polar caps are melting? I was disappointed in that there was no attempt to explain where they came from.

I think part of my disappointment stems from the fact that I read a digital version of this book and was judging how much I had left to go by the percentage indicated at the bottom of the screen. When I hit 65-70% marker and came across THE END, I felt cheated (the remainder of the book was dedicated to a preview of a future work). I was like WTF? That's the end? That can't be the end. For me, that's a mark of a good story where I find myself wanting more and it isn't there. My only hope is that Meikle will pick up where he left off with this story and explore the origins of the great beasts.

I will be the first to admit that Crustaceans is not for everybody, but if you were (are?) a fan of movies like The Deadly Mantis, Food of the Gods, THEM!, then I would highly recommend it.
Posted by Woofer at 7:58 PM