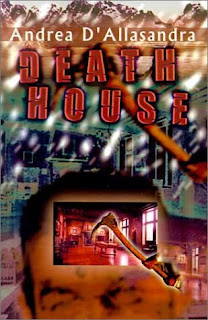 Twelve years ago, two teachers were brutally massacred at a secluded house on the outskirts of the town of Snowflake, North Carolina. Scalped, sexually mutilated, decapitated.

The killer was never caught.

Liz Johnson never quite felt comfortable in old Saunders Home. There was the feeling of being watched. Things being moved. The feeling of never quite being alone, even when she knew she was the only one home. But she and her husband had invested too much on the house to move out, not that they couldn't afford it. After the death of her husband, there's really nothing to keep her there -- until her rather disagreeable mother shows up on her doorstep under the pretense of helping her daughter throw this difficult time of her life. Martha Sawyer's sole purpose in life is to make her daughter as miserable as possible. Despite the presence of her mother, Liz has decided to sell the house and move into a condo much too small to accommodate both her and her mother, which means the woman will be forced to move back to Florida. To celebrate the beginnings of her new life, Liz plans a party for the weekend, inviting some of her closest friends. The snow starts to fall, and as they arrive at the house, the storm unleashes its fury, shutting them off from the rest of the world.

The killer, who has the uncanny ability to mimic the voices of others, returns home and, one by one, tries to dispatch the invaders. Who will survive the weekend of horrors?

Andrea D'Allasandra's Death House is a self-published endeavor, and I have learned to approach self-published works with caution. I will admit to being surprised with this novel. Despite some tedious repetitions, I enjoyed Death House. The reader should be forewarned, however, because is very formulaic in its style: a bunch of young 20/30 somethings, a secluded house, a storm to cut them off from any sort of escape, and a crazed serial killer. It's liked a novelization of a Friday the 13th or Sleep Away Camp minus the gore. While the aftermath of the killings is described in some graphic detail, very few of the actual killings are. Think Friday the 13th edited for network television. The killer approaches its victim, the weapon is raised, is brought down for the killing blow, and then jumped to the next scene. Being a gore hound, I did find this to be a little bit of a disappointment, but not enough to keep me from reading future works by this author.

The only drawbacks to this particular work, and it is a problem I have with most self-published projects, are some of the typographical errors and the occasional grammatical errors, which make me want to take out the red pen. Overall, though, it was an enjoyable read. If you are a fan of slasher films, I think you will also enjoy Death House.
Posted by Woofer at 6:58 PM