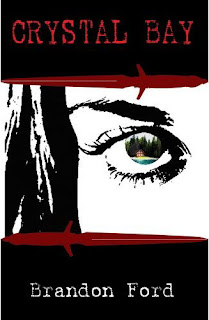 Students aren't the only ones who look forward to summer vacation. Teachers are just as excited as the school year comes to a close, and Gage Healy, the main character of Brandon Ford's debut novel Crystal Bay, is no different. Gage has become disillusioned with life as a teacher, and he seeks to pursue his life-long ambiton -- becoming a published writer. The only thing standing in his way is life -- his job, his wife, all the distractions that coming with being married and owning a home. He seeks to leave it all behind so he can devote 110% of his energies on the novel he knows he has in him. And as the school year comes to a close, that is exactly what he plans to do, much to his wife's disappointment.

On his way to Crystal Bay, the vacation home of his youth, Gage makes a stop in a roadside dive for a bite to eat and stretch his legs after the long drive. His attention is drawn to an exquisite creature by the name of Amanda. Even after he leaves the bar, she preys on his mind. Is it more than coincidence that she turns out to be his neighbor when he arrives in Crystal Bay?

From the beginning, he knows he's in trouble because their relationship quickly escalates from neighborly to sexual in the blink if an eye. While being overwhelmed with guilt, it is not enough to say no to Amanda, who, as it turns out, seems to be his muse because after every sexual encounter, the creative juices flow copiously. But Amanda has a secret. A darker purpose. Will Gage wake up to the danger he is in and escape her clutches, or will he fall victim to the evil within?

For a first novel, I was surprised, and I really shouldn't have been, but recent experience with "first novels" had me fearing the worst. I am happy to say that I truly enjoyed Crystal Bay; I couldn't put the book down. Brandon Ford has created characters that you come to care about, and you can sympathize with Gage as he takes his trip on the wild side. You know he loves his wife, but the muse can be seductive, and his desire to succeed as a writer is his weakness. What you find yourself hoping as the story progresses is that his love for his wife is strong enough to overcome the lure of seduction.

With that said, I must also admit to a bit of disappointment because I found myself wanting more, and it wasn't delivered. There's a scene early on between Gage and his parents. I was getting the feeling as the scene unfolded that there was something unspoken going on, like maybe Gage's mother knew more than she was letting on. She was so dead set against Gage's trip to Crystal Bay, and it seemed to go beyond that "think about your wife and what you are doing to her." Was there more to it? Was she aware of the darkness of Crystal Bay? I also wanted to know more about Amanda. I can't say too much without giving anything away, but there was too much mystery surrounding her. I wanted more about her past and when it wasn't delivered, I couldn't help but feel disappointed and cheated.

I think Brandon Ford holds promise as a horror author and I look forward with anticipation to his future works, which I will be picking up, and I urge you to do the same.
Posted by Woofer at 8:23 PM