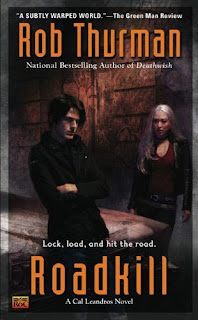 Well, I wonder if it is saying something that the next item in my literary menu centers around another road trip? And I couldn't think of a nicer set if traveling companies that Cal and Niko Leandros and Robin Goodfellow. . . and Robin's mummified cat, Salome. Well, I could do without that cat. Really.

For those not familiar with the Leandros Brothers (think Sam and Dean Winchester, only sexier and snarkier), you are missing out and you need to correct this social faux pas like yesterday. So promise me you will head out to your local bookstore (or log on to Amazon) and pick up Rob Thurman's books, the first in the series being Nightlife. Well, what are you waiting for? Oh, you want to hear about the road trip.

The past comes back to haunt Cal and Nick when an ancient crone of their mother's gypsy clan approaches them with a job. Seems somebody has stolen something that belongs to her, and she wants it back. Since Abelia-Roo last stunt almost got Niko killed -- just a little tidbit of information she forgot to mention -- the brothers are prepared to tell the hag to shove it until she informs them that if they do not get back what was stolen from her, the world as they know it will cease to exist. A bit melodramatic? Maybe. But also true. You see, Abelia-Roo's clan was responsible for guarding Suyolak, a sociopathic anti-healer who has been locked in a coffin for centuries. He is also known as the Plague of the World. If he is released, the disease he could spread would wipe out the world's population in a matter of days. Being old, Abelia-Roo sometimes tends to forgets to mention things until it is too late. This time it slips her mind to tell the brothers that the seals her clan have placed on the coffin to keep Suyolak contained are weakening.

As if this isn't enough, Cal's dirty little secret has been exposed -- he's been getting it on with a sexy she-wolf on a fairly regular basis. This is enough to warrant a death sentence with the Kin, a Mafia-type group made up entirely of werewolves. Since Cal isn't entirely human himself, the insult to the Kin is all the greater. Until they can find out the Kin's intentions, they figure it best to take Abelia-Roo up on her offer. Joining the brothers on their road trip is Robin Goodfellow, a randy puck who has entertained fantasies of getting Niko into bed. Rafferty returns, as does Catcher, Rafferty's cousin. Rafferty is a healer, the best that they know, and they are bother werewolves. Well, Rafferty is a werewolf. Catcher was, but now he is stuck in wolf form thanks to Rafferty's attempts to heal him when he was younger. The healing worked to well, and now Catcher cannot change back to human form. Rafferty has made it his life's ambition to find a cure for his cousin. Also joining our motley crew is Delilah, Cal's lupine main squeeze. Delilah's intentions are questionable; does she come out of sense of loyalty to Cal, or is she tagging along hoping to find an opportunity to kill Cal, thus reinstating her in the Kin's good graces. Does everybody survive this road trip to Hell? You'll have to read and find out.

With Roadkill Rob Thurman has delivered the goods once again. It's an edge of your seat thriller that provides quite a few good laughs -- and some tears. There are twists and turns you won't see coming (and some you will), some you may not be happy with if you are a fan of the series, but they are inevitable. All of the characters (those who survive) go through changes, as the road trip is semi-symbolic of the trip we are all on, and as on any trip, discoveries are made. We may not like everything we find out, but we accept it and we deal with it. And we go on. Thurman deals with these discoveries in a believable and realistic manner.

If you are caught up with the series but haven't yet read Roadkill, I can't encourage you enough to pull up a seat and take a little trip. If you aren't familiar with the series, I highly recommend you start at the beginning with Nightlife, then move on to Moonshine, Madhouse, and Deathwish. If you are a fan of the CW's Supernatural, you will love this series.
Posted by Woofer at 9:26 PM