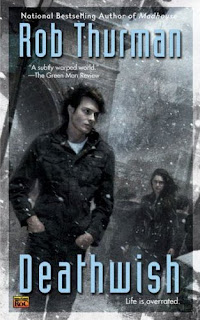 . . .especially if your family is the Auphe. Yes, the Auphe are back in Deathwish, Book 4 of the Cal Leandros series by Rob Thurman. For those not familiar with Rob Thurman's series, the Auphe are a race of creatures from an alternate dimension, beings beyond your worst nightmare and they take great pleasure in torture and murder. With the Auphe, death is rarely slow in coming. The heroes of Thurman's series are half-brothers Cal and Nikos Leandros; Nikos, the elder, is human, Cal is half Auphe, although you wouldn't know it to look at him.

Deathwish picks up where Madhouse left off, with Cal running for his life through the streets of New York City, an Auphe in hot pursuit. This comes as a surprise, as Cal and Nik believed they had killed off the Auphe in an earlier installment. Cal needs to reach Nik, because where there's one Auphe, there's bound to be more, and they have promised to destroy everybody Cal holds dear to him before dragging him back to the hell that is Tumulus.

As if the Auphe weren't enough, Promise, Niko's vampire lover, has found a client who wishes to hire the brothers. Officially, Cal worked at The Ninth Circle, a bar that catered to a supernatural clientele, and Nik worked part time at NYU. Unofficially, they kicked monster ass. The client Promise has found is Seamus, another vampire and one of Promise's lovers from her past. She claims the affair was over a long time ago, but Seamus, on seeing Promise after all these years, becomes jealous of Nik. To add to the growing list of problems, another secret from Promise's past shows up on her doorstep in the form of her daughter, Cherish. Cherish has problems of her own. Promise admits her daughter is a liar and a thief, a bad apple, but when Cherish claims she is being pursued by Oshossi, an immortal who is trying to retrieve something that Cherish has stolen from him, something she claims to no longer have. It is out of pride that Oshossi pursues her.

Can the brothers survive with a plate this full? Pick it up and find out.

Within the past few years, I have found myself reading more and more Urban Fantasy, and I have to admit, if I wasn't a native New Yorker, I probably would not have picked up Nightlife, the first in the series. That was the big selling point for me. I was not sorry I did. Thurman's style is "snarky" and fast paced, putting you firmly on the edge of your seat and keeping you there from the very first page. She has an instinct for comic relief and weaves it seamlessly throughout her narrative, providing that release when the tension gets too high. You may find yourself laughing out loud as you read passages like this one: " 'Issues?' he echoed incredulously. 'Jesus, Nik. People on Dr. Phil have issues. We have atomic-powered, demonic-flavored, fresh-from-the-pits-of-hell, full-blown fucking neuroses. Freud would've been in a corner sucking his thumb after one session with us.' " Or, "And I'm sleeping with a wolf who if she wants an after-sex snack might decide that's me, but I still like her anyway."

I love this series and strongly urge everybody to give it a try. If you are a fan of the TV show Supernatural, I'm positive you will love Rob Thurman's series. But don't start in the middle. The books, in order, are Nightlife, Moonshine, Madhouse, Deathwish, and the just released Roadkill.
Posted by Woofer at 5:54 PM