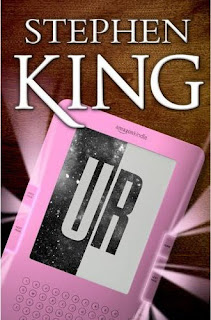 What would you do if you discovered your Kindle had a secret menu that didn't exist on any other Kindle but yours? Well, that's the problem one Wesley Smith finds himself faced with.

Wesley Smith is a college professor with a great love for books in this novella by Stephen King. After breaking up with his girlfriend over a comment about books -- her basically telling him to ditch the books and start reading on the computer like everybody else, and him calling her an illiterate bitch -- Wesley really starts to think about what her parting statement. Shortly after the breakup, Wesley discovers one of his students has a Kindle and is intrigued by it, and after thinking long and hard about reading on the computer like the rest us, he breaks down and orders a Kindle. When it arrives, he notices that it's pink, and chalks it up to a manufacturer error. The fact that it arrived via overnight mail when he hadn't requested express delivery only serves to confirm that suspicion. The manufacturer wanted to rush it out of the warehouse before the error was caught, and shipping it out to some unsuspecting customer proved cheaper than discarding it.

As he plays with it, he discovers an "Experimental" setting that lists a series of UR books, subscriptions, and local. When he checks out the book section, he feels like he has entered into the Twilight Zone. The dates for Hemingway's death are wrong, the author information has him dying several years later, and there are a number of books Wesley, as an English Professor, knows the author never wrote. And Hemingway isn't the only author listed.

This begins his descent into madness, and he brings one of his students and a fellow professor along for the ride. They discover "alternate reality" newspapers, as well as future events for his local area. Knowing what the future holds, does Wesley set out to change the course of events, or does he allow them to play out as they were meant to? You'll need to read it and find out.

This novella is a shameless promotion for Amazon's Kindle, otherwise King would have made up a fiction name for the device, as well as a fictional corporation from which the device is purchased, but he doesn't do so; in fact, Amazon is mentioned quite often throughout the short work of fiction. There are attempts to tie it in with the Dark Tower universe, and not being overly familiar with that particular series, I found that interesting, but overall, this novella is nothing to write home about. If you find yourself needing a King fix, I would recommend skipping this and re-reading some of his earlier short stories, as his earlier work is his best work.
Posted by Woofer at 7:23 PM