VAMPIRES, WEREWOLVES, AND WITCHES, OH MY! 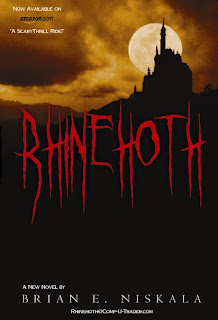 After a brief foray into Urban Fantasy, I thought I was talking a literary trip back to my old stomping grounds -- the horror novel. Unfortunately, Rhinehoth by Brian E. Niskala, would be classified as another Urban Fantasy novel with a pinch of Paranormal Romance thrown in.

Simon Roberts has been tried and and found guilty by association of murder. He was the wheelman in a jewelry heist gone wrong that left the jeweler and the three gunmen dead. While Simon was not involved with the shooting, somebody needed to be held accountable and Simon, driving the getaway car, is the lucky man. He is sentenced to a life-term in Rhinehoth, a maximum security prison located deep in the Black Forest of Germany. Rhinehoth is an ancient castle that was converted to a prison.

On his arrival, many things about Rhinehoth seem familiar to Simon, the building, one of his fellow prisoners -- a man named Siegfried, the only person who has ever successfully escaped from the prison, some of the guards, and the prison's doctor, the beautiful, cat-eyed Maxine Heulen. From his very first day, Simon is visited nightly by dreams of Maxine that grown increasingly erotic in nature, which only serves to create this deep attraction to the strange woman, who, we find out early on, has a fondness for blood. He is also the subject of a strong animosity from the guards, who are almost bestial in their attitudes, and receives a beating that leaves him a patient in the infirmary. As the mysteries surrounding Rhinehoth deepen, Simon's role in the events unfolding at the prison become clear.

The story strikes a cord close to the Underworld series in that it deals with a century long battle between werewolves and vampires. That in itself was enough to keep my reading, and while I love the Underworld series, I cannot say the same thing for Brian Niskala's first novel. But that's not to say I didn't like it, because I did. The thing that kept me from loving Rhinehoth is poor writing. I got the feeling this book was written in haste and was not revised once it was completed. The sentence structure is lazy, starting present tense, switching to past, then back to present, sometimes within the same sentence. Typographical errors and the improper use of words had me going back and rereading paragraphs at times, and missing words in sentences were a major stumbling block. All this combined made for painful reading. There are plot points that I feel could been developed more but they were glossed over. This happened, this happened, and this happened, and the lack of development makes this read like a first draft. I wish the author had turned the manuscript over to an editor. If he had done that and the manuscript had been tightened up, I feel this could have made for an excellent novel.
Posted by Woofer at 7:23 PM