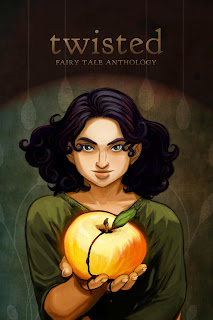 Ever since reading Tanith Lee's Red as Blood, or Tales from the Sisters Grimmer, I have been fascinated with traditional Fairy Tales that have been rewritten with a twist. That's why I was so excited to see an anthology of Twisted Fairy Tales. I eagerly read the short collection in one night, and I am sorry to say, I was more than a little disappointed with this collection.

The tales within were either hit or miss, which is to be expected with most anthologies, but when you compare "The Three Little Kittens 'A New Tail'," which depicts a dysfunctional feline family, to "Glass Slipper", you can't help but feel disappointed at the imbalance of story quality. Where the story of the three little kittens paints a graphic picture of what life is like for the three little kittens after their father passed away, dealing with a whoring, alcoholic mother, "Glass Slipper" is an attempt to re-spin the classic Cinderella story, but it feel like the author got bored with it or lost her direction and decided to wrap it up, leaving the reader with a WTF moment, and you turn the page expecting more, and you are greeted with the next story.

The same can be said for "Natalie's Garden", which comes across at first like a psychological Sleeping Beauty, with a mental patient who is withdrawn. You expect an awakening to occur, but the ending just leaves you wondering what happened with the rest of the story. "Green", which hints of Rapunzel, is a jumbled mess that reads like an draft of a story that was never completed. A retelling of the story of Snow White, "Snow," starts off on a promising note with a suicidal Snow White, so unhappy with the way her life has turned out, cooking and cleaning and picking up after a bunch of dwarfs, that she welcomes the attempts on her life by the wicked witch, and she grows resentful of the little men who are constantly foiling the witch's plots. But once again you are left with an abrupt ending that leaves you looking for more. "See Red" is a confusing mish-mash of Little Red Riding Hood that lacks cohesiveness. Also visiting the Little Red neighborhood is "I Wore Crimson", a reflective piece that doesn't seem to fit in with the retelling of tales, but offers a look back as a mother prepares her daughter to go out into the world. The reflective nature of the piece gives it an incomplete feel.

One of the gems in this anthology is "Mrs. Culling's Reformatorium for Wayward Children," a chilling update on the story of Hansel and Gretel. Instead of a Gingerbread Cottage, the witch now runs a home for wayward youths. What better way to sate your appetite for children than to have those who are no longer wanted brought to you. They'd never be missed.

"Cinder Sister" is a spin on Cinderella, and while it is not as satisfying as some, it's a different take on the story and has a satisfactory ending.

Hansel and Gretel is revisited in another satisfactory tale, "Dylan and Megan," that has the brother and sister running away from a murdering drug addict and being taken in by a kindly toy maker.

One of the great failings of this anthology, beside the uneven caliber of the stories, is the number of times a particular story is re-visited. I feel the editor would have done better if she only used each Fairy Tale once, use the best Snow White story, the best Little Red Riding Hood story, etc. The repetition of the story types makes the anthology redundant, and it would be very easy to become bored with it.

The stories I highlighted as being the superior pieces in this compilation make the anthology worth reading, but I would look for a discounted bound copy or a digital version, preferably pdf. I would not recommend the Kindle version, which is what I read, as the formatting is horrendous, often having one or two sentences appearing on a page, the anthologies title appearing sporadically through the work, and some annoying gray boxes that appear without any apparent reason, often being the only thing that appears on the page. The best option, though, would be to borrow a bound copy from somebody who has already purchased it.
Posted by Woofer at 8:03 PM