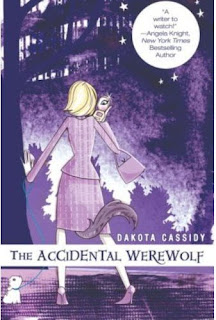 Once again I have found myself out of my so-called comfort zone with my reading with Dakota Cassidy's The Accidental Werewolf. It's what I would definitely call a chick book, but I really enjoyed it.

As the book opens, we find Marty Andrews being confronted by a strange man who claims to have bitten her. As a result, she is now a werewolf. Whack job, Marty thinks, as her mind plays back the events of the past few days. She was on cloud nine, having finally achieved her goal of Lavender for Bobbie Sue Cosmetics. Think Mary Kay with the pink Cadillac, only with Bobbie Sue, it's a lavender suit. With eyes on her ultimate goal, a sky blue convertible, Marty was having a hard time holding on to her "high" as she tried to bolster the morale of her newest -- and only -- recruits, Nina and Wanda, but of whom liken Bobbie Sue, with her peppy and constantly sunny disposition, to a cult. They are walking the street with Marty's poodle, Muffin, when the ball of fluff goes all pit bull on a large black shepherd. In an attempt to rescue her beloved pet, Marty is nipped by the larger dog. Nothing major, but it did break the skin. In the days that passed, Marty does find herself undergoing changes that she can't explain -- a darkening of her hair, the need to constantly shave her legs, and a craving for meat (and she's a vegan). But surely there must be some other explanation, a scientific explanation, for what is happening to her other than the Twilight Zone-ish explanation Keegan Flaherty is offering because plain and simple, werewolves do not exist.

As Marty struggles to come to terms with what is happening, and her attraction for the loony who thinks he goes all furry when the moon is full, she is kidnapped -- and forced to come to terms with the truth. She has, indeed, become a werewolf -- or a poor excuse for one. As she lays locked in a trunk, her anger at her kidnappers rages out of control and triggers a shift. But poor Marty, the only thing, other than superhuman strength that allows her to kick her way out of the trunk, that manifests during her shift is a poor excuse of a tail. Unable to call the police because of her condition, she calls the only person she can -- Keegan Flaherty, the man who left her in this predicament.

While trying to figure out who kidnapped her, Marty has to deal with Pack politics, a jealous she-wolf who wants Keegan for herself, her rapidly growing feelings for Keegan, and her pathetic excuse for a tail and mounting frustration at the inability to shift completely.

Cassidy's style is light-hearted and fun, which makes for a fast read. She doesn't get overly bogged down in descriptive details that sometimes tend to grind a story to a halt, choosing to provide only the bare minimum to establish a feel for the surroundings, which helps to move the character-driven story along. The almost flippant attitude the book is written with helps to establish the characters, who you grow to care about. I often found myself in Keegan's shoes, rolling my eyes (in a good way) and smiling as Marty rambled on with her incessant questions, her eccentricities, and her sarcasm.

There was only one problem I had with the book. There are explicit sex scenes, and while I am far from being a prude, I found them to be a stark contrast to the rest of the book, and I was left with the distinct feeling that the book was written by two different people. One person wrote the majority of the story and another person wrote the sex scenes. This is not the case (at least I don't think it is), but it was the feeling I was left with. It would have been interesting, and less jolting, if the same light-hearted style that carried the majority of the book was applied to the sex scenes. This does not reflect badly on the author, and it will not stop me from reading more of her work. In fact, I've already bought the next one and will be tackling that shortly.
Posted by Woofer at 8:38 AM