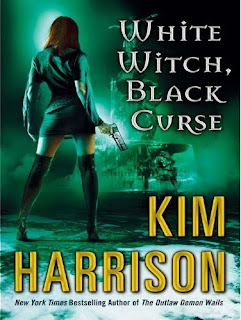 Welcome to The Hollows, a dark corner of Cincinnati where the creatures of the night live, hide, prowl, and eat. It is also the home of Vampiric Charms, an independent runner service owned by Rachel Morgan, Ivy Tamwood, and Jenks. For those not familiar with the series (this is Book 7), Rachel is a witch who dabbles with demons, Ivy is a living vampire with demons of her own, and Jenks is a sassy pixie.

While Rachel deals with recent discoveries regarding her true nature, the investigation in her Kisten's death continues. She struggles against a memory loss spell which left her remembering nothing of the night her boyfriend, another living vamp, was killed. While visiting the scene of the crime, some memories are triggered, but not enough to to name the killer. As she makes for home, she receives a message that her friend Glenn was injured while investigating a crime for the FIB, a human offshoot of the police department responsible for investigating supernatural crimes that the IS (the supernatural equivalent of the FIB, but answers to no one) deems not worth their attention, and is in the hospital. It turns out his aura has been stripped and has left him in a compromised state. Edden, Glenn's father and head of the FIB, asks Rachel for her help in tracking down the responsible parties who left his son for dead.

Rachel, Ivy, and Jenks head out to the crime scene and find evidence that the guilty parties are psychotic mortal and a banshee, a supernatural uber-predator that feeds of emotion and has the ability to kill by stripping a person of their aura. Once the aura is gone, the soul has nothing left to cling to, it flees the body. To make matters worse, this Bonnie and Clyde from Hell have a baby, and they will do anything to protect her, not that the little tyke needs it. She turns out to be just as lethal as Mom, only worse because she has no control. In a confrontation, Rachel finds out just how lethal the supernatural child can be when she is all but stripped of her aura and left hospitalized.

With all of this going on, Rachel is trying to work out the problems with her social life. Not having dated anybody since Kisten's death, she is drawn to Marshall, a friend and fellow witch. They have a great friendship and decide to take it to the next level. To complicate matters, our trio of investigators has had an unknown resident living with them for the past year, a ghost named Pierce, whom Rachel had temporarily given substance when she was 18 in order to help save a young girl. In that one night, feelings developed, which she dismissed as a girlish crush, but now she finds those feelings resurfacing. Is it possible to carry on a relationship with a ghost? To complicate matters even further, Rachel's past comes back to bite her in the ass and she is labeled a black witch by the coven.

Want to know how everything turns out? You'll have to pick up the book. And if you haven't read anything in the Rachel Morgan series, you'll have lots of reading to do before you find out what happens.

Kim Harrison's books, like so many books I've been reading lately, are so out of character for me. At one time I was die-hard fantasy, then a twist in the road lead me to horror, and for the longest time that was all I read. Thanks to my neighborhood Barnes and Noble doing away with their horror section, I was forced to browse through the Sci-Fi/Fantasy and regular fiction titles to find the horror titles I was looking for, as they had merged the horror section into those two sections. The title of the first book in the series, Dead Witch Walking, jumped out at me. Having grown disillusioned with the Anita Blake series and how it had devolved into something bordering on porn with minimal story, I was looking for something to fill the void left by Blake, I decided to take a chance. I have not regretted it. Rachel, even though she's a witch, is not all powerful. She has her insecurities and her weaknesses. Ivy, a living vamp, has been abused and is so emotionally screwed up, you can't help but feel for her. And as dysfunctional as they are, they compliment each other and make a good team. There is some sexual tension, as Ivy is admittedly bisexual and is interested in Rachel in that way. Despite Rachel's claims that she is not wired that way, does want to be able to provide Ivy with what she needs. She wants to be able to provide Ivy with the blood she at time craves, but draws the line at sex, but Ivy, thanks to the abuse at the hands of her master, has trouble separating blood lust, sex, and/or pain. To her, they are interwined. But the truth of the matter, and what hooked me on the series, is Jenks. He may not be big, being a pixie, but his character is larger than life. He's sassy, smart-mouthed, and caring.

The only problem I had with this adventure into The Hollows is that it has been five months since the death of Kisten. For two people who claimed to have loved him (yes, Kisten and Ivy were involved at one time), to only now be putting any effort into find out who killed him is a little unbelievable. Other than that, the story moves at a quick pace. I'm looking forward to the next in the series, Black Magic Sanction (due out soon), with a combination of anticipation and trepidation. I am eager to find out how Rachel deals with the label of black witch, but the bookclub I belong to has an Explicit Sex disclaimer. I'm hoping the series is not going to follow in the footsteps of another popular series.
Posted by Woofer at 6:05 PM