Yes, Virginia, There is a Zombie Santa 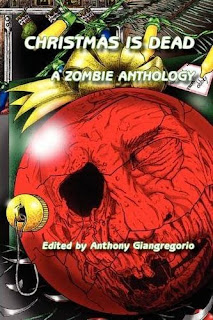 While zombies have long been a part of the horror genre, it isn't until recently that I've taken an interest in this category of the undead. However, being the Ebenezer that I am, the idea of zombie Christmas stories appealed to me, so it was without reservations that I jumped into the grave, so to speak, with two feet and started reading Anthony Giangregorio's Christmas is Dead: A Zombie Anthology.

The tales range from the typical zombie outbreak that just so happens to take place around this festive time of year to the more fantastical tales that feature zombie reindeer, zombie turkeys, zombie Santas, and superheroes battling the undead. For the most part, the stories are solid and well written, but some of the more far-fetched stories fell flat, at least for me.

Some of the highlights are Yes, Virginia, There Really is a Zombie Santa Claus, a story that explains the origins of Zombie Santa, Satan Claus, tells the tale a department store santa who dies on the job, Christmas Harvest, where Death realizes that there is something worse than death, and Red Christmas, a disturbing tale that shows just how far one person will go to survive.

Overall, the authors did well combining the Zombie Apocalypse with a Holiday Theme (so much so, I am going to be checking out Love is Dead, another holiday themed anthology that tackles Valentine's Day), and anybody who enjoys tales of the Living Dead is encouraged to pick up this novelty published by Living Dead Press.
Posted by Woofer at 7:57 PM