Somewhere Over the Rainbow, Blue Birds Fly. . . and Zombies Roam 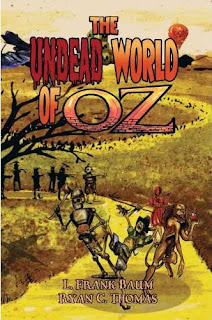 I'm going to be blunt here; The Undead World of Oz by Frank L. Baum and Ryan C. Thomas did nothing for me. After having read Pride and Prejudice and Zombies, which I thought was an interesting concept (even if it didn't work for me), my curiosity was piqued by a similar approach to the Wizard of Oz. Would it work better, being that it is already a fantasy? Alas, it turned out to be as big a disappointment as Pride and Prejudice and Zombies. To me, if you have read one, you've read them all.

As I said, the concept of Pride and Prejudice and Zombies intrigued me, as I was curious to see how they would work in the zombie elements. It was done remarkably well, I won't take that away from the authors, as I feel Thomas also did a remarkable job of interweaving the additions to make it appear as if the zombies were part of the original story, but it did little to add to the story. Having read the originals, I was quickly growing bored with the books, and I found myself skipping ahead just to find out where/what things were added and changed. I feel that there is a lack of creativity on the part of the author(s); while the concept is creative, the execution requires more a knack of being able to duplicate the language of the original author, so I can appreciate the works on a technical level, but as a creative narrative, the creativity belongs solely to the original author. In order for these to be successful (for me at least), I would rather see the author take the original story and rewrite it in their own words and include their zombie concept. Going forward, I feel that's how the authors should approach these rewrites rather than just adding to the original texts.

With that said, about The Undead World of Oz. . .

If you have read the original, the story is pretty much the same word for word until Dorothy lands in Oz. Her house does land on the Wicked Witch of the East, and she does meet the Witch of the North. However, their meeting is interrupted by the arrival of Undead Munchkins clamoring for brains. On hearing Dorothy's desire to return home to Kansas, The Good Witch advises her to go and see the Wizard; she also requests that Dorothy ask the Wizard to put an end to the curse of the Wicked Witch and lay the Undead to rest. So, donning the silver shoes of the Wicked Witch of the East (yes, silver, although by the end of the book they are Ruby Red Slippers after they have become stained with the blood of the zombies), she sets off to see the Wizard.

One her way, she does rescue the Scarecrow, the Tin Woodman, and does encounter the Cowardly Lion, and as they venture to The Emerald City, they encounter zombies and assorted other monsters. They finally arrive, only to be told my the Great and Powerful Oz that he will not grant their requests until the bring proof that the Wicked Witch of the West is dead. So it's off to slay the witch, and on that journey they face even more monsters and zombies, including the Flying Monkeys. Dorothy succeeds in killing the witch, and when they return to Oz, the Wizard grants all of their requests -- except the two Dorothy made -- so the Scarecrow has his brains, the Tin Woodman has it heart, and the Cowardly Lion has his courage. As Dorothy is about the climb into the hot air balloon to return home, the zombies lay siege to the Emerald City. Toto jumps from Dorothy's arms to attack the zombies, and Dorothy goes after him, leaving the Wizard to depart the Undead World of Oz alone.

Left in Oz, Dorothy comes to the conclusion that if she is going to be stuck in this strange world, it is going to be up to her and her friends to make the land safe for everybody. Needless to say, Dorothy does eventually return home with the help of the silver shoes. As for the ending, this was the only part of truly enjoyed, even though I was able to predict it early on, as it offers up an explanation as to how zombies came to inhabit our world.

The commercial success of Pride and Prejudice and Zombies is spawning way too many rip-offs, of which The Undead World of Oz is only one. I have been unfortunate enough to have read two of these zombifications of the classics, and I won't deny that you should read at least one just for the experience of reading, but leave it at that. Pass on the others so that we don't encourage this trend of "rewriting" the classics, of which there are far too many already.