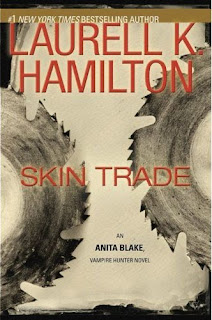 I've been a die-hard Anita Blake fan for years; recently, however, I'll admit to being disappointed with the last few books in the series (starting with Incubus Dreams), as the books moved away from mysteries and became more about Anita's sex life, so while I still bought and read them, they weren't always a priority on my TBR pile. A friend of mine urged me to start this one because it was more like the first books of the series -- and I am happy to say that the old Anita is back, stronger than before, but still trying to gain control over her growing powers. How long before the books revert back to the bed hopping, only the author knows. But enough of that, on with the book.

The books opens with Anita receiving a unique present while at work -- somebody care enough about her to send her the very best, a severed human head. Turns out the severed head belongs to a fellow vampire hunter who worked in Vegas. Obviously, what happens in Vegas doesn't always stay in Vegas. Along with the head, there's a note so Anita knows who to thank for this lovely gift. Turns out Vittoria, a ruthless vampire serial killer, is back, and he wants Anita. Is it revenge, as Anita has had a run-in with him in the past, or is it something more?

Anita contacts the Vegas authorities, feeling the need to let them know exactly what they are up against. Things turn out to be worse than she expected, as there were eleven law enforcement officials slaughtered at the same time as their local vampire hunter, and it was done through supernatural means. As a Federal Marshall, Anita sneaks off to Vegas on her own (which Jean Claude is not happy about), without any of her entourage that will help her control her growing powers. In Vegas, she teams up with fellow Marshalls Edward, Bernardo, and the unpredictable Olaf, who scares Anita more than some of the Uber Monsters she has gone up against. Being without the Men in life, Anita faces the possibility of losing control of the ardeur, the one power that has proven to be the most unpredictable, and the one power that has turned her into the equivalent of a living vampire. As if that wasn't bad enough, there is also the threat of the Mother of All Darkness, the Mother of All Vampires, who has the habit of attacking Anita when she is at a disadvantage, and she does not disappoint.

I was surprised when I read it. The book is 486 pages, and with each page I turned, I cringed; I was waiting for Anita to lose control of the ardeur and have to have sex with the nearest available man in order to sate it. It was with some relief that she did not need to feed until the book was near completed (somewhere in the 370s/380s), and then it was not painfully drawn out. My only problem with the book was the ending. Without giving it away, I found the ending to be rushed and anti-climactic. There was also one incident that takes place that caught be totally off guard, as it totally blows out of the water where I thought Hamilton was taking the series. All in all, the ending aside, I was more satisfied with this Anita Blake adventure than I have been in a long time.
Posted by Woofer at 5:52 PM