For Love of the Dead by Hal Bodner 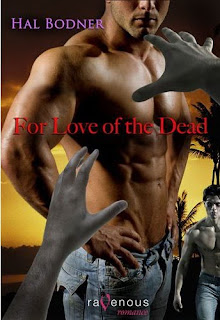 Jake Marshal knows death. In fact, as a Funeral Director, Jake Marshall is surrounded by death on a regular basis, and since he lost his lover, Devin, in a hit and run, Jake has also become somewhat morbidly attached to the beautiful young men whom he has helped lay to rest. He has pictures of them on his living room wall and dwells in the past, wondering What if. . . What if he had met them before they died? Would they have have died so young if he had been involved with them? Could they have been THE one who could complete him so he could rejoin the world of the living? Mark Hartner is one of these men.

When Jake first meets Mark, Mark is dead. Very dead. And is laid out on the table so he can be embalmed and laid to rest. He is in awe of the man's angelic beauty and he starts wondering what if? He doesn't have to wait long to find out. Tyler Deauxfines has an agenda -- and it involves Mark Hartner and Jake Marshall. Tyler is a houngan, or voodoo priest, and he holds Mark responsible for his brother's death. With the aid of his Dark Gods, Tyler succeeds in reviving Mark Hartner. Imagine Jake's surprise when he finds Mark sitting up on his table.

Jake quickly finds out that Mark is not the kind of man he could have a relationship with, not like Mario, the one man he has met that seems to understand his love for the dead; Mark is egotistical, arrogant, and cruel, a man used to seeing what he wants and taking it regardless of the consequences. And Mark never suffers the consequences. In this case, Jake is the one who suffers.

When Jake and Tyler finally cross paths, Jake discovers the truth of things. He finds out what a despicable person Mark really is and how many people he has hurt in his short life. He also discovers what role he has to play in the course of things.

I'm not going to reveal anything more in case you decide to read the book, and if you aren't put off by gay relationships and gay sex, I would highly recommend reading it, which is surprising for me. When it comes to my reading, I tend to stay away from what is considered "erotica" because I find the sex contained within it tends to overpower the story, and usually there isn't much of a story. I find the sex is used as filler for a lacking story line. That was not the case with Hal Bodner's For Love of the Dead, published by Ravenous Romance. What I found here was a gruesome little tale that had the right balance of horror, romance, and sex. With that said, there was one sticking point for me, and that is only because I am a gore hound. While I did say there was an even balance, I did find there was an imbalance in the gore -- one scene is rather graphically described while another scene is glossed over. That does not take away from the book as a whole, which I thoroughly enjoyed and could not put down, but it did leave me feeling a little cheated -- but as I said, I'm a gore hound.
Posted by Woofer at 9:14 PM