And Then There Were Nine... 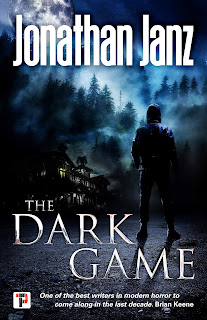 Once upon a time, King and Koontz were my DROP EVERYTHING AND READ THE LATEST BOOK authors, but after one disappointing read and another, I started looking for new GoTo authors. Hunter Shea quickly became one of them, especially with his cryptid novels. The other is Jonathan Janz. While I haven't read everything Janz has written, I am working on remedying. To date, Janz has not disappointed me. Which is why The Dark Game, Janz's latest, quickly moved to the top of my TBR pile.

The Dark Game tells the tale of ten writers hand-chosen by Roderick Wells, a celebrated but reclusive writer, to compete in a summer-long contest for a cash prize and a publishing contract. These ten writers have been chosen not only for their talent, but also because they each possess a dark secret, secrets that will be revealed as the competition progresses. Like all competitions, there are eliminations, but unlike other competitions, these eliminations are private. The remaining contestants are told who has been eliminated, and they're somewhat put off by the fact the the departing contestant didn't bother to say goodbye.

Early on, one might think they know where the story is headed, and chances are good that they'll be wrong. And that's one of Janz's strengths. He'll lead you into what you think might be a rehash of something you've read before, but then he'll rip the rug out from under you when you least expect it, leaving you in uncharted territory where you fumble along with the characters to figure out what the hell is really going on. But not to worry; you'll be in good company. Janz fleshes out his characters fully, and there are those you instinctively like and want to fall in with, while others you take an immediate dislike to and hope they'll be one of the ones eliminated early on. But if that were to happen, you would end up with a dull story, so you know some of the bastards are going to stick around.

At first glance, The Dark Game comes across as a potential reality show, only there are no cameras, but you'll soon learn it's so much more than that. There are ghosts aplenty haunting the characters, ghosts from their own pasts and ghosts from those who have gone before. So you might think this is a simple haunted house novel, and in a way you'd be right, but it's more. Janz pulls in enough otherworldly and supernatural elements to keep you on your toes and keep you guessing. Who is the actual bad guy here? Is it the contestants and their dark secrets awakening something within the house? Is it the house itself? Or is it their host? Or some of the other apparently minor characters who eventually take on more importance as the story progresses?

The story moves along at a brisk pace, and each chapter ends with enough mystery to keep you reading. You'll be telling yourself, "Just one more chapter. Just one more chapter." And before you know it. it's 4 o'clock in the morning and you have to be up in three hours to get ready for work. Yeah, it's that good. So do yourself a favor and sign up for the game. You won't be disappointed. If you've read other books by Janz, you'll know by now that he just keeps keeps getting better, so The Dark Game is Janz at his best (to date). I can't wait to see what he comes up with next.
Posted by Woofer at 1:15 AM