It Sure as Hell Ain't Meg 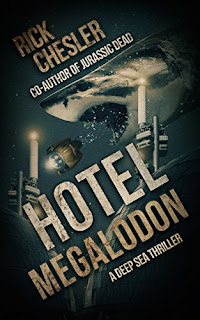 There are times when I binge read a certain category of books. Coming off of Jaws, Meg, and The Trench, I was still in the mood for something dealing with sharks, but I wasn't ready to dive into Meg: Primal Waters just yet, so I tooled around on Amazon for a bit and discovered Rick Chesler's Hotel Megalodon. Story sounded interesting, so I picked it up.

I have to admit, the book had potential, and in the hands of Peter Benchley or Steve Alten, I think we would have had a hit on our hands. The story is simple: the development and building of a "luxury" underwater hotel disturbs a megalodon, that then proceeds to launch its attack on the hotel on opening weekend, methodically cutting off any means of escape for the guests and staff. The focus of the book, besides the shark attacks, is trying to get the guests safely out of the hotel and back on land. Sounds thrilling, right? Yawn. Wrong.

The problem we have here is the author not having a firm grasp on his subject matter. And if he does, something got lost in the translation as he put words to page because it doesn't come across. The setting is supposed to be a luxurious underwater hotel, but you don't get the feeling that the place is that luxurious. A kid in the book describe it best: it's like a Habitrail for humans. For those unfamiliar with Habitrails, it was a plastic prison for hamsters, gerbils, and mice. It was made up of a central "living area" with
tubes that led to other smaller compartments. And that's exactly what the hotel feels like, nothing luxurious about it. AND it's opening weekend and the guest list is all A Listers, so they need to impress. And make an impression they do. In the fact that nothing, and I mean nothing, has been tested for functionality, so you know when they attempt to activate something, it's going to fail. Of course. Like the escape pods -- that sink.

The other problem is the characters. You really don't come to care for any of them. The "hero" of the story is a young marine biologist, described as being in her mid twenties, but when you first meet her, she comes across as a fifteen or sixteen year old during a Bring Your Daughter to Work day. She's obviously out of her league here, so you hope she becomes shark chow soon so they can bring in the real star. James White, the man running the whole show and the resident villain, is so inept at his job, you have to wonder who he slept with to get the job. Maybe Mick, the supposed love interest, who breaks the heroine's heart when she walks in and finds him in a compromising position with the dolphin lady -- Carrie, Clarrie, Clarice, whatever the hell her name is. She's not important.

You also get the impression that the only knowledge the author has of marine equipment and sharks has been garnered from reading Steve Alten's books and Jaws, or maybe from an Atari 2600 simulation. When Coco is piloting the sub, it just doesn't seem real. And the megalodon? There were times I felt like I was watching SyFy's Supershark, especially when the shark was breaking windows and attempting to swim into the hotel to get at the guests. It would get itself wedged into a place, then swim backwards to free itself (sharks mobility is limited to forward motion), and often it seemed like the author lost track of his shark. In one scene, he says it slipped from window, and the body was more or less acting like a plug because suddenly the water was pouring in, but then the shark is back to snapping at Coco. Uh, didn't it just extract itself from the window to allow the water to flood the hotel? And every so often the author would throw out terms from out of the blue just to make it sound like he knew what he was talking about. And all you could do was chuckle.

And the ending?!?! OMG, I wanted to throw the book across the room . If I hadn't been reading a digital copy, I probably would have, but I didn't want to damage my Kindle. It was probably the worst part of the book. It's literally like giving a kitten a boop on the nose and telling it to be good.

Sadly, though, the author doesn't pursue what could probably have been one of the more interesting aspects of the book, and that's the old tribesmen that appear at the beginning and the end. You get the feeling that the megalodon is kind of a guardian spirit that rises up to protect the islanders and their way of life, almost like Godzilla defending Japan, but that aspect is never explored.

Overall, this book was a major fail for me, and if you are in the market for a big fish story, I'd suggest looking elsewhere.