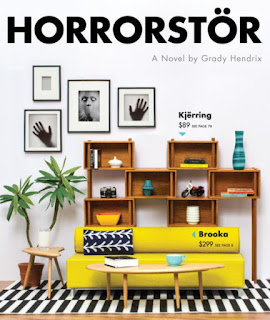 After seeing Grady Hendrix give a presentation a few weeks ago on Paperbacks from Hell, I figured I'd give one of his books a shot. I mean, the guy was hysterical and I could not stop laughing. And after hearing such great things about Horrorstör, I figured I give it a try. I went into it expecting more of what he gave at his presentation, and after a line like this, "Trinity was one of those happy, super-popular, high-energy girls who reminded Amy of the creatures from Gremlins: she was fun for about half an hour, then you wanted to stuff her in a blender.", well, it seemed to reaffirm my expectations. Sadly, my expectations were not met.

For folks unfamiliar with the premise of the book, it deals with an IKEA-type box store that is haunted, although the employees aren't aware of it. Yet. What they are aware of is somebody sneaking in at night and vandalizing the store in little ways that wouldn't be noticeable unless you stumbled upon it. Like poop on one of the display beds. Since Corporate is planning a visit, the General Manager has tasked one of the floor managers with putting together a team to spend the night in the store with the hopes of apprehending the intruder. Enter Basil, the manager; Amy, a sales rep who gets by by doing bare minimum and avoiding her supervisor (Basil) as much as possible; and Ruth Anne, an elderly dedicated employee who has manned a register for a good number of years and someone who everybody (staff and customers) adores. During their first tour of the floors, Amy and Ruth Anne stumble across "happy, super-popular, high-energy" Trinity and her boyfriend of the moment, Matt. We get the impression that they are just finishing up some business before getting down to business (if you know what I mean, wink, wink), which is trying to film some footage of some ghosts, which they plan on showing to the networks with the hopes of getting their own ghost hunting show. Needless to say, all hell breaks loose, but not before they locate the intruder, who Trinity is convinced is a ghost. What follows is a lot of screaming, a lot of running, and a lot of playing hide-and-seek with an army of ghosts haunting the store as the group tries to make it out of the store alive.

On the outside, it doesn't sound like a bad book, but it's not what I was looking for. I wanted funny ha-ha ghosts, and instead I got scary EEEEEK!!! ghosts, so you'll have to excuse me if I feel a little disappointed. I know, get over it, right? I'll try.

While I try to do just that, let's discuss the book itself. While effective on its own, it fails when you compare it to other books (and movies) that tell a similar story. And when I say it fails, I mean it doesn't deliver anything new, which, I admit, is hard to do when you are dealing with one of the oldest tropes in the horror genre. While reading it, you can't help but notice the influences of films like Poltergeist and The Haunting. Recently I read another haunted house novel, The Siren and the Specter by Jonathan Janz, which really creeped me out. Again, it didn't offer anything ground-breakingly new, but what it did have was atmosphere, and while reading it, I actually caught myself starting at every sound and getting up to turn up the lights. Toy Box, a film I recently watched, attempted to take the haunted house a step further, and the creators gave us a haunted motor home. And I felt that was missing from Horrorstör. You get the impression that Hendrix was more concerned with the chain of events than developing a genuinely creepy atmosphere. And he tended to rely on the tried and true rather than risk trying something new. In so doing, he gives us a supernatural adventure story rather than a creepy (or funny) ghost story.

His characters are quirky when we are introduced to them, which provided ample opportunity to venture into the Ha-Ha territory, and while he may have tested the waters by sticking a toe in, he refused to take the plunge and kept us in the EEEEK! territory. And normally I prefer when an author keeps us within the mindset of one central character, Amy turns out to be a rather blah! character once the story gets going, and you come close to not liking her because she's only out for herself. About three quarters of the way through the book, she redeems herself. She's still blah, but not nearly as selfish as she was in the beginning. I can't help but wonder, though, what would have happened if somebody like Trinity was the central character, or if we had the opportunity to see things from the POV of other characters.

So is Horrorstör worth reading? Despite the issues I had with it, it was a fun, fast-paced read (not as great as everybody made it out to be, but enjoyable enough even if it wasn't funny), and if you're looking for a way to pass the weekend, this is an ideal book. However, if you're looking for something to chill you late at night, I think you'd do better looking elsewhere.