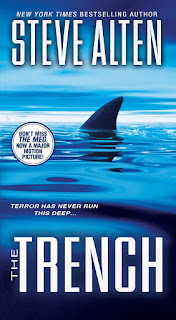 As part of my "Don't Go Near the Water" summer reading, I decided to follow up Steve Alten's Meg with the second book in his living fossil series, The Trench.
The Trench picks up four years after the events that transpired in Meg. Angel, the baby megalodon they captured, is now a permanent resident of the Tanaka Institute. Jonas and Terry are married, but their marriage is in trouble due in part to Jonas's obsession with the dinoshark and his being consumed, eaten alive, by his survivor's guilt. The miscarriage Terry suffered during the numerous trials and lawsuits didn't help matters. In fact, when everything was said and done, the Tanaka Institute is on the verge of bankruptcy, and is bought by Benedict Singer, an unscrupulous businessman with a hidden agenda--an agenda that includes Jonas.
At about the same time Jonas is being approached by Singer and his protege, a knock-out blonde, Celeste, who has her eyes on Jonas, Angel is becoming more agitated within her enclosure. They think it's because of the migrating whales passing by, but it's more than that. Angel is in heat and is feeling the call of the wild. Her agitation grows, and eventually Jonas's worst fears come true: Angel escapes. Torn between his obsession over the shark and his duty to his new boss, Singer, Jonas opts to pursue the shark, determined to put an end to it before it can kill again, which leaves his wife to fill his shoes with Benedict Singer, making her the only woman aboard the underwater research station.

What follows is a dogged pursuit of the shark while becomes Singer's prisoner once she realizes there's more going on than just planting the UNIS robots.
The Trench is an ambitious book in that it's more than just a Moby Dick-like tale of obsession. There's government conspiracies, international intrigue, and games of cat and mouse, both aboard the William Beebe as it pursues Angel and aboard the underwater research station, and Alten handles it all flawlessly. We learn the real reason why Jonas was in the Mariana Trench eleven years ago, when he had his first run-in with the megalodon, and who the divers were who were killed. The problem is, Alten's Big Bad in The Trench is not as fleshed out as one would hope and becomes a caricature of the villain holding the damsel in distress.
As the novel progresses, we know there's another major predator loose within the Mariana Trench, as it already destroyed one sub. This is the reason why Terry is aboard the research station. She needs to file a report, but her report, while complete, isn't entirely truthful, as information has been hidden from her. She's given just enough to come to the conclusion that the destruction of the submersible was pilot error and not because it was attacked by some unknown creature lurking in the shadows. While Alten has to opportunity to bring another megalodon into the picture, he chooses not to, and brings in another prehistoric life form that's been thriving beneath the thermocline. Which makes you wonder what else is loose down there. If you've read The Loch, then you know some of what will be encountered in future books, as the sequel to The Loch, Vostok, is also the prequel to Meg: Nightstalkers, you'll have some idea of what's to come. So I am eager to jump into Primal Waters.
Graphic, at times, as the body count is high in this one, it doesn't detract from the narrative, which is evenly paced and thrilling. Meg was a fun read, The Trench is even better: more action, higher body count, underwater battles between leviathans. Definitely a must-read for fans of killer shark fiction.