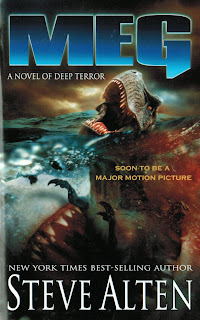 After reading Steve Alten's The Loch, I felt it was time to re-visit Meg: A Novel of Deep Terror, especially after I found out that the sequel to The Loch was a prequel to one of the Meg novels.

The novel opens in prehistoric times with the meg taking down a tyrannosaurus rex. Then it jumps to present day with a deep sea explorations of the Marianna Trench, considered to be the deepest part of the ocean that has never been explored. As is the case with many horror novels (yes, Meg is a horror novel), you don't go sticking your nose where it doesn't belong because you end up releasing some sort of monster you can't lock away again. And sure enough, isolated from the rest of the world by a layer of freezing cold water is a tropical world containing many species long thought extinct. The Meg being one of them.

Right from the start we are told there's more than one giant shark, and we know one is male and the other is a pregnant female. The male is unintentionally killed, which allows the female to rise to the surface as she travels through the icy waters in the warm bloodstream of the butchered male. The body count starts to climb almost immediately once this living fossil surfaces, and it is up to Jonas Taylor to hunt down this monster.

Taylor was, at one time, considered the best submersible pilot around, until an encounter with the megalodon traumatized him so badly that he retired from the sea and devoted his life into the study of the prehistoric shark. He's become quite the renowned paleo-biologist whose theories were often greeted with ridicule from others in the field. But he's also a man haunted by his past. His actions during his previous encounter cost the lives of two men, and while he firmly believes that he'd come face to face with a giant prehistoric shark, there's the niggling of doubt that continues to eat away at him like a cancer. But with the surfacing of the meg, he's vindicated, and all those who laughed at his theories and those who accused him of murder because he overreacted in a stressful situation are forced to swallow their pride and admit they were wrong.

What follows is a thrill ride as Taylor and his team pursue the meg in an attempt to capture the beast so they can study her. They are in a race against time, as they know the meg is pregnant, and they need to catch her before she gives birth. They are also in a race against time with the military, as the military is hunting the shark with every intention of killing it before it can kill again.

While the focus of the novel is the hunt for the giant shark, there's more going on than just the chase. You have Taylor's disintegrating marriage, the betrayal by his wife (who's just as vicious and hungry for success as the meg is for flesh and blood) with his best friend. She's an overly ambitious news reporter who will stop at nothing as she climbs the ladder to fame and fortune, and that includes setting up her husband to look like a laughing stock. He's a man on the edge thanks to the events of his past, and she unashamedly is making every attempt to push him over the edge so she has grounds for a divorce. She wants to paint herself as the victim to Jonas's villain. In Heller, who personally holds Jonas responsible for the death of his friends, you have a Captain Ahab-type character. After witnessing the death of his brother in the mouth of the shark, he loses it; now it's personal, and he will not stop until he kills the megalodon. And lastly, you have the budding relationship between Jonas and Terry Tanaka, a woman reeling from her own losses; they are thrown together in the pursuit of the shark and take comfort from each other as their losses become more personal.

If you are only familiar with Meg from the god-awful movie (which I've seen dozens of times--it's really not THAT bad), forget about everything you saw. The only similarities between the book and the movie is the shark, and even that wasn't adapted accurately. While the movie is a family friendly flick about a giant shark where the body count is downplayed. the book is most definitely a horror novel that takes great relish in describing the deaths in grisly detail. It is Jaws on steroids, so if you liked Jaws, you'll LOVE Meg. If you thought Jaws was meh!, you'll like Meg. Start your summer off right. Read Meg.