It's All the Rage 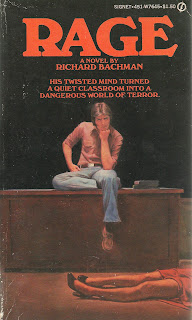 A while back I had heard that, in the light of all the school shootings, Stephen King had requested to have Rage pulled from publication. Ever since then, I had been on a quest to find a copy and read it. Well, I finally was able to find a copy, and I sat down to give it a read through. The story line is relatively simple: a slightly off-balance high school student, Charlie Decker, snaps one day, kills two teachers, and takes a classroom of students hostage and threatens to start shooting if he doesn't get what he wants. The problem is, there's no clear indication of what he wants except to toy with the police and the administration. Then four hours later, he lets them go. Very anti-climactic.

Personally, I don't see why this relatively short novel has been pulled from publication. It's tame compared to what's going on in the world today. And the copy on the cover... "His twisted mind turned a quiet classroom into a dangerous world of terror." You don't get that feeling at all. Well, maybe in the beginning, but eventually you get the idea that these kids are all friends and they know Charlie isn't going to do anything to them. Hell, one girl even leaves the room to go to the bathroom. Instead of making a break for it, which any normal individual would have done found in the same situation, she actually comes back to the room and takes her seat. Reading it, I felt more like I was in an AA meeting or something other 12 Steps program, where each student confesses something about their past or their home life, maybe something they're not too proud of. All very touchy-feely. Well, all the students but one -- Ted Jones. He seems to be the only one reacting poorly to the situation, and he harbors so much anger and hatred for Charlie, yet it's never clear why. Yeah, the guy's a psycho and he's got a gun and anything can set him off so we should all be afraid for our lives, but nobody else seems to feel that way. In fact, they all seem to sympathize with Charlie's situation. Sure, he's a troubled kid, but based on what we've learned about him, nothing in his past prepares us for the situation we find ourselves in. **SPOILER** And unless I'm missing something, it's unclear as to why the students turn on Ted in the end. Maybe he's a scape goat, and by tormenting and traumatizing him, they're really transferring their emotions toward Charlie onto Ted, but the reader doesn't get that feeling. It's also unclear as to why Ted had such a reaction to what the students did. Maybe it was something they said to him, but we're not privy to that.

All in all, it was a good book, but hardly the scandalous read I had been expecting, especially after hearing so much about it. But then again, that seems to be the trouble with hype. So much stuff fails to live up to the expectations you have after hearing so much praise for a book or movie. Rating: 3 of 5 stars.
Posted by Woofer at 11:42 AM