The Power of Christ Compels You! 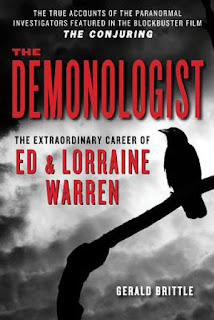 Ever since I was a kid and I'd heard of Hans Holzer and Ed and Lorraine Warren, I had wanted to become a paranormal investigator. This joins cryptozoologists in a list of jobs I would do if I ever had enough money that I wouldn't need to work for a living. But as childhood flights of fancy are prone to do, they fade away like dreams, to be replaced by the realities of the everyday world and adulthood. I'd never really given it any thought in my adult life, but with the release of The Conjuring several years ago, it awakened those memories. Not in a way where I wanted to chuck my day job to chase ghosts, but in a way where I wanted to explore it more for... Let's call it research. And what better place to start than with The Demonologist: The Extraordinary Career of Ed & Lorraine Warren. Yeah, yeah, I know. They're frauds. Or so many people claim, some of whom have worked with them and offer that as supporting evidence. But I wanted to read more about their cases. Turns out, this particular book was not the book to read to satisfy that itch.
What you have in Brittle's "biography" is a look inside the lives of the Warrens -- when they are not on a case. You learn a bit about their early lives, pre-ghost hunting: how they met, what they did and what they wanted to do with their lives, and how they got involved in their current profession (if profession is the correct word, as they claim they never took a dime from the people they helped). Makes you wonder where the money came from that allowed them to travel across the country and all over the world. That's something that is never really discussed. One would assume it was from their speaking engagements and one course Ed taught at a Connecticut university.
What you don't get is an in-depth discussion of their cases. Yeah, there's a mention of Annabelle, the haunted doll, and the Enfield haunting, and they do touch upon the Amityville Horror and The Exorcist. And while they do discuss in detail one or two cases, it wasn't enough. Not by a long shot. With that said, I did enjoy what I read, I just wish there was more. The balance of the book is religious discussion on demons, devils, inhuman and human spirits, and what to look for if you suspect someone you know is being haunted. They also tell the reader how to safeguard against spirit oppression and possession. Again, it was interesting, but not what I was looking for. Rating? Three stars. Could have been four if they had more case study and less chatter.
Posted by Woofer at 8:15 PM