Never Make a Deal with a Demon 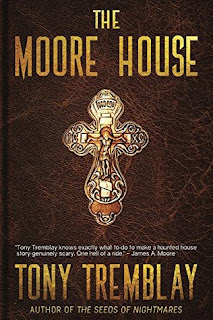 This past July saw the debut of Tony Tremblay's The Moore House. I'd been hearing great things about this book for the past six months or so, so I was excited to get my hands on it. When I finally did, I placed a number of things on hold so I could delve right into it. For me, it sadly did not live up to the hype.

We've all seen this type of story before. Paranormal investigators are called in to investigate a house that has been the site of numerous brutal murders over the years and is assumed to be haunted or possessed. In this particular case, the paranormal investigators are a priest and three nuns. Well, former nuns. Each has left their respective sisterhoods for their own reasons, which we learn about as the story unfolds. Once they venture into the house, they become trapped, and the demon within proceeds to have his fun with them. The question becomes: Can they withstand the torments imposed on them, summon their strength through their belief in God, and vanquish the demon, or are they destined to become the next ghostly residents of The Moore House?

I'm not going to deny that the book is well written and the pacing is such that you are carried along to the end on a wave of suspense. You can't help but to read on to find out what happens. So what was my problem with the book? Well, for one thing, I've seen so much of what transpires within the pages of The Moore House in other books and films, so to me it just didn't feel fresh. The opening sequence in Tremblay's work could have been lifted from the movie See No Evil, a film I have watched numerous times.

My other problem with Tremblay's novel is the characters. In this type of story, you're supposed to be rooting for the heroes and heroines. You're supposed to want them to vanquish the evil and escape unscathed from their haunted prison, and you'd figure that wouldn't be a problem with a priest and three nuns. And if that's what you figured, you'd be wrong. The characters turn out to be vile creatures, each harboring dark secrets that make them awful people who are hoping to erase their dastardly deeds from their past by doing good work. They hope to find redemption by doing the Lord's work, so they are not acting selflessly when they put themselves in danger, but selfishly. I found myself hoping they'd all get their comeuppance. In addition to their base nature, they also behave like a bunch of amateurs. These are supposed to be seasoned professionals who have battled demons in the past, yet they make every mistake in the book, mistakes you'd expect a novice to make, but not someone who has done this type of thing before. You can't reward stupidity, so by the time they all become ensnared in this demonically designed web, you find yourself rooting for the demons.

So do any of them make it out? I'm not going to ruin that. You'll just have to read it for yourself. Does that mean I'm recommending it? You might think my answer to that would be no, but it isn't. Tony Tremblay's The Moore House is NOT a bad book; it just wasn't for me. I said it earlier, and I'll say it again—The Moore House is a well-written, fast-paced novel that hooks you on the first page and keeps you hooked until the end. Tremblay's strength here is creating a narrative that moves you swiftly along, so settle back for the ride. If you are a fan of haunted house novels, I think you'd enjoy it. Just don't go into it expecting anything new. And if you're a horror fan, it's definitely worth the read. Maybe you'll come away from it with something I didn't.
Posted by Woofer at 3:18 AM