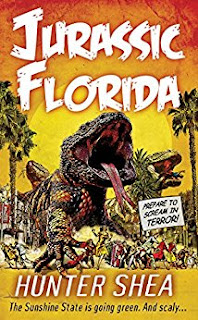 My first exposure to the works of Hunter Shea was The Jersey Devil. I was so impressed with that novel that I followed up immediately with Loch Ness Revenge. Another winner. I have some of his other books on Kindle, which I will get to when some of my time frees up, but when I saw Jurassic Florida, I had to drop everything and read this, especially since I had just watched The Giant Gila Monster, one of those 1950s horror movies where nature strikes back, and unfortunately, I have to say this wasn't nearly as good as the two novels I had already read. Don't get me wrong. It was a fun read, but it lacked the depth and detail of The Jersey Devil and Loch Ness Revenge. The main focus here is on moving the story along without bogging it down with any backstory. As a result, you don't become invested in any of the characters, and therefore you don't feel anything when they die their gruesome deaths.

The story set up for Jurassic Florida is one we've all seen, especially if you've seen any of the recent SyFy giant creature movies or any of the movies of the 1950s that featured small towns being attacked by supersized bugs and spiders. An environmental disaster, in this case a BP-sized oil spill, riles up the wildlife along the Florida coastline. The town of Polo Springs see a dramatic increase in the iguana population. The little beasts are everywhere, and they just keep coming. Here, Shea borrows from the 2010 remake of Piranha, and we find out these vicious little guys are only the babies. So where are Mommy and Daddy? It doesn't take long to find out. Chaos ensues as the behemoths push their way to the surface and the residents of Polo Springs are running and fighting for their lives. Who lives? Who dies? Does anybody survive? You'll just have to read it to find out.

As I already mentioned, this was a fun read, but it could have been so much better had Shea adhered more to formula for this type of tale. The residents assume the oil spill forced these giant iguanas from their underground lairs. What they don't say is that the oil caused a genetic mutation that allowed these creatures to grow to the size of dinosaurs. As a reader, I don't accept the fact that they were always there, not in the numbers that surface. Some one or some thing created these creatures. Had Shea adhered to formula, the scientist(s) would have been brought in, as well as the military, who, working with the good Professor, would find a way to defeat these monsters and rescue the trapped townsfolk. Leaving the townsfolk to fend for themselves as they attempt to vanquish these beasts is anticlimactic, at least for me. You're prepared for a big showdown between man and beast that never really manifests. That aside, I would still recommend it, especially if you're looking for something light to kill some time. It's perfect for those couple of hours spent on the beach or by the pool.
Posted by Woofer at 5:10 PM