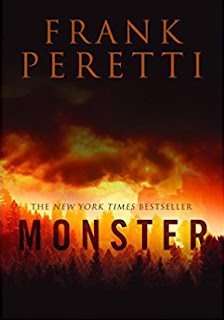 Ever since I was a kid, I had a thing for cryptids, so imagine my surprise when I saw that Frank Peretti had written a book dealing with Bigfoot.

I had my first exposure to Peretti years ago when I read The Oath, which, if memory serves me correctly, I enjoyed. At the time, I made it a point to check out more of the author's work but just never got around to it. Between life and other books, he just got lost in the shuffle. Part of the reason he got lost is because I heard he was "Christian author," which turned narrow-minded me off to his books; however, he wrote a book about Bigfoot. Bigfoot! Despite the mixed reviews, I HAD to check it out.

Monster gets off to a mysterious start with a hunter covering up  an obvious murder, staging the scene so that it looks like the man died in an accident. Why? Well, it's obvious he's tracking something, and he doesn't want people to know what actually killed the man. One can assume it's a bear, but is there something else loose in the woods, something more vicious than a bear?

The scene then jumps to two couples who are planning to meet up for a survivalist weekend. Reed and his wife, Beck, arrive at the rendez vous point ahead of their friends, only to find the cabin they had been planning on staying in destroyed and the hired guide nowhere to be found. They investigate the cabin and the area surrounding it and come to the conclusion that it was a bear. Because it's so late in the day, they are left with no recourse but to camp out for the night, as there isn't enough daylight left for them to make it safely back to civilization. They set up camp away from the cabin take the necessary precautions so as not to attract the bear to their campsite, but as soon as the sun goes down, the surrounding forest comes alive with grunts, howls, and what they swear is a woman sending out a a mournful wail into the darkness. They become aware of a presence in the woods, and they realize it isn't a bear, but something with intelligence, as it's keeping just far enough within the shadows of the trees so it can't be detected. They try to stay calm, but fear takes over, and soon they are running through the woods. In the process of trying to evade whatever is pursuing them, they stumble across the body of their guide, hidden in a tree and practically decapitated. Needless to say, the chase ends with Reed witnessing some creature carrying his wife off into the woods. This sets the stage for the rest of the book: a search for and rescue of Beck from the creature that took her.

Despite the mounting evidence that the creature in the woods is definitely a biped, there is a resistance group among the rescuers who continue to insist it's a bear and try to convince the others that there's no such thing as Bigfoot and that what carried off Reed's wife was indeed a bear, and they shouldn't expect to find her alive -- if they find her at all. Meanwhile, we find out Beck is alive. Injured, but alive, and being held "captive" by a family of Sasquatches: an adult male, two adult females, and a juvenile male. It become obvious that the one adult female view Beck as her child and is determined to take care of her and protect her from the other members of her family (?), who make it clear they do not want Beck among them. Will Beck survive long enough to be rescued by her husband? Will her husband give up the search in light of evidence that points to Beck no longer being among the living? And what of the mysterious hunter from the beginning?

With Monster, Peretti has created a thrilling novel that is so much more than just a tale of survival. It's also a tale of intrigue because yes, there is a cover up, and there's also a twist that you won't see coming. His characters are fully realized, and you come to care what happens to them. As far as his creatures are concerned, you gain an insight into them that you wouldn't expect, so yes, you even care about what happens to them, more so as the truth is revealed.

The thing I can't understand are some of the reviewers' comments, saying that the religion is laid on rather thick. I didn't find that to be the case at all. I've found Koontz's later work to be rather heavy handed and preachy when it comes to religious beliefs, but within the context of the book, the characters praying and asking God to deliver/return them safely is quite believable. Even the most un-religious person will sometimes throw up a prayer to the Man upstairs asking them for a little help, so this aspect didn't bother me nearly much as it seems to bother other readers. And it certainly hasn't turned me off to the author. I know I said this once before, but I definitely will be seeking out more works by this author, and this time I fully intend on following through.

Would I recommend Monsters? Absolutely! I think it's one of the best Bigfoot novels I've read to date.